During the 10 years I’ve been into professional programming, the largest paradigm shift I’ve witnessed is the one from sequential to asynchronous programming. Not that it is a new concept – asynchronousity has been has been present in programming since the dawn of time, but what’s new is the tight integration in programming languages and the prevalence of it. From events and callbacks in C# to async-await. From callbacks in Javascript to Promises. In Java we got Futures in Java 7, CompletableFuture, lambdas and streams in Java 8. On top of all these language features you have a vast array of libraries that help you implement common async patterns – ReactiveX for instance exists for all the three languages mentioned, and a lot more.

I’ve been programming quite a bit in all the three languages mentioned: C#, Java and Javascript, and I realized I had to re-learn all the same patterns over and over again. On top of the languages features there were libraries as well. Multiple for each language. In this blog post I will iterate what I believe are the 3 most common patterns, list and compare them in these languages. I welcome contributions for other languages or patterns to this github repo – let’s together make this more a reference than a blog post!

Let’s say you’re building a user interface which depends on two REST services. One provide a list of news article items, while the other is an image hosting service which return image binaries from URL’s. The first service returns URL’s which are to be used as input for the second service. This makes second operation dependent on the first – they have to be executed serially:

Use case: Parallel execution, wait for all

This time the user interface is composed of data from two independent services. You want to display a blank screen with a progress bar only while loading. Only when all data is fetched, you start rendering. This is what I dub the form-merge parallel execution: 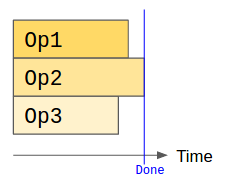 In this case you’re firing multiple HTTP queries to identical services, but only care for the response from the first to reply. It might be that you’re building a performance-critical application, or you have multiple 3rd-party providers delivering the same service but with varying degree of reliability. 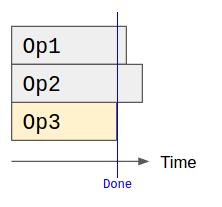 Below is listed short examples illustrating the three patterns in the different languages, with support functions in the first chapter.

For Java I’ve chosen to use the RxJava framework simply because that’s what I know best. If you know how to do the same with plain Java (8), please let me know or contribute with a pull request to the repo!

Thanks to Espen Volden for contributing with Javascript examples