Nothing matters more than speed for the iOS product development team in Schibsted News Media.  Soon also VG will launch on their super-fast app.

The Stockholm part of the iOS team: Jonas Salling and Yuwen He in front, Anton Dasismont, Maciej Banasiewicz and Gabriel Minarik in the back

Five people in Stockholm and two in Krakow. That is the Core News Product iOS team in the Product & Tech organization of Schibsted News Media.  Their task? To develop a smooth native app for Apple´s phones and tablets to be used by all of Schibsted´s publishers.

Very soon also VG will launch a new iOS app on the same platform – and later this year Aftonbladet and Svenska Dagbladet are the next in line.

One feature is more important than anything else, claims the team: The news experience must be extremely fast!

“Our ambition is to provide a smooth and polished experience to the users, and not only for the big, national brands, but also the smaller sites, “ adds tech lead and engineering manager Jonas Salling.

In this super-short video we compared VG´s new iOS app with the app of NRK.no

In this super-short video we compared the new iOS app for VG with the current app.  We tapped at the same time on both versions.

So far the results are promising. Although the numbers cannot always be directly compared, they show a significantly higher engagement level among the users.

For instance almost 10 % of the app users today use the app every day in a month. That is up from about 6 % for the old iOS apps.

“There are also other positive number. The average user of the new apps today visits about 20 pages per week – and that is double what we saw with the old apps. The click-through rates from the front pages have also increased from about 50 % to 80-90 %,” says product manager Anton. 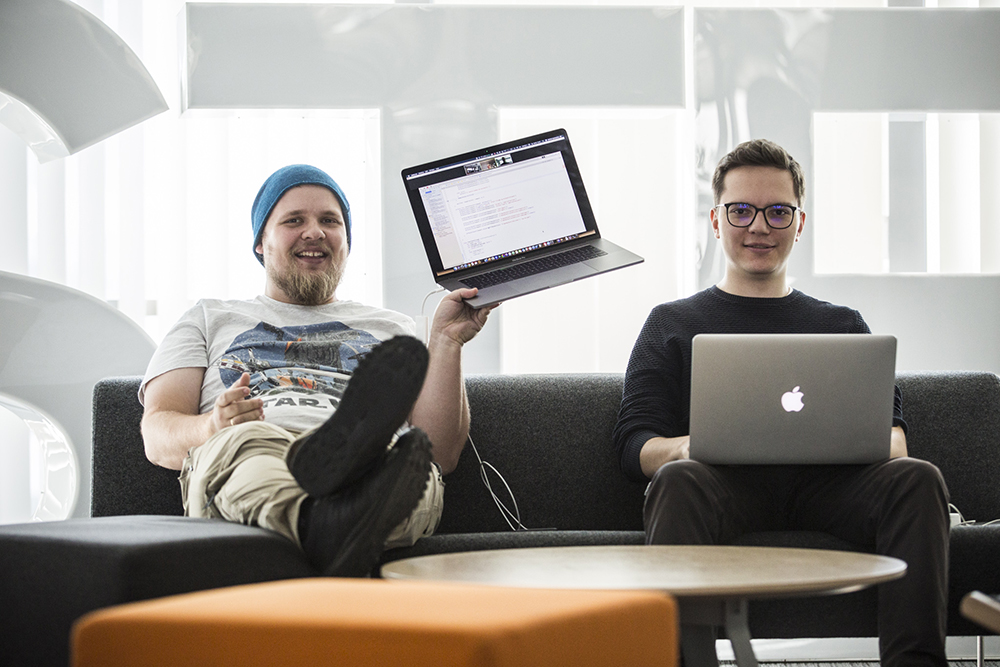 Two of the members of the iOS team are based in Krakow:  Michał Apanowicz and Marcin Mucha

But how can brands as different as VG and Fædrelandsvennen use the same mobile apps? Aren´t their needs just oceans apart?

“Our app is like a car factory. We have lots of different modules that are put together in different ways for each brand. Everyone knows that under the car bodywork a lots of the engine parts are the same, be it in an Audi or in a Volkswagen,” he says.

Product manager Anton reckons that about 90 – 95 % of the brand apps are the same.

“It is easier to say what differs. And that, of course, is primarily the look and feel of the app. Almost all functionalities are the same.”

The iOS apps are part of Core News Product, Schibsted´s joint platform for production and distribution of news.  This means that the iOS team in no way works alone.

The list of other product & tech teams in Schibsted they cooperate with is long:

“It is maybe easier to say which teams we are not cooperating with,” smiles Yuwen He, who has worked as interim product manager for the last few months while Anton has been on parental leave.

But that question requires a lot of thinking when asked. The mobile apps are so integrated with all part of Schibsted´s technical platforms that the members of the small team struggle to name other product & tech teams they do not cooperate with.

“This is an extremely competent team! And it is so cool to see how fast and efficient the new iOS app is!  The other product managers frequently emphasize the professionalism of the iOS team and how skilled they are in effective collaboration with other teams,” says Børrea Schau-Larsen, product director in Editorial Solutions.

“The iOS team has proven itself to be solution-oriented and hard working in a time where unforeseen events outside of our control has challenged our delivery. We are impressed by the effort put in by all of what is a very skillful team, and in VG we look very much forward to be over on Hermes soon!”

The team has decided to work in a very agile way – and releases new versions of the apps every second week.

“This means that we have to prioritize hard which new features can be included in each release. And we need to leave out stuff, “ says Anton.

They have come to realize that part of their job is to educate the rest of Schibsted in what a good app experience is.

“In Schibsted we have been very web-oriented. The previous apps primarily displayed the websites in a mobile version. A native app experience is different, and as domain experts, it is our job to fight for what we think are the best solutions,” says Jonas.

Native app teams must work in a different way than the web teams in how they roll out the changes. In a web app, new versions can be put live immediately, and the team can roll back in seconds if something goes wrong.  The iOS team, on the other hand, must submit the new version to Apple and wait for approval. Then it must wait for the users to wait for the latest version.

“Fortunately our users upgrade very quickly when we have new versions,” says Yuwen.

Most users today upgrade to the latest version the iOS app within a couple of days, as this example from January shows.

A team with pride

The team is very proud of their work.

Product manager Anton sums it up this way:

“I am really proud of what we do and achieve together as a team. And I feel that we are part of something bigger and take on a huge democratic responsibility, even as a small product development team.”