After decades in the shade space is back on the agenda. Private entrepreneurs are pushing the limits of exploration, speaking about living on Mars and exporting our dirty work. And we tend to listen – filled with hope, existential fears and imagination. 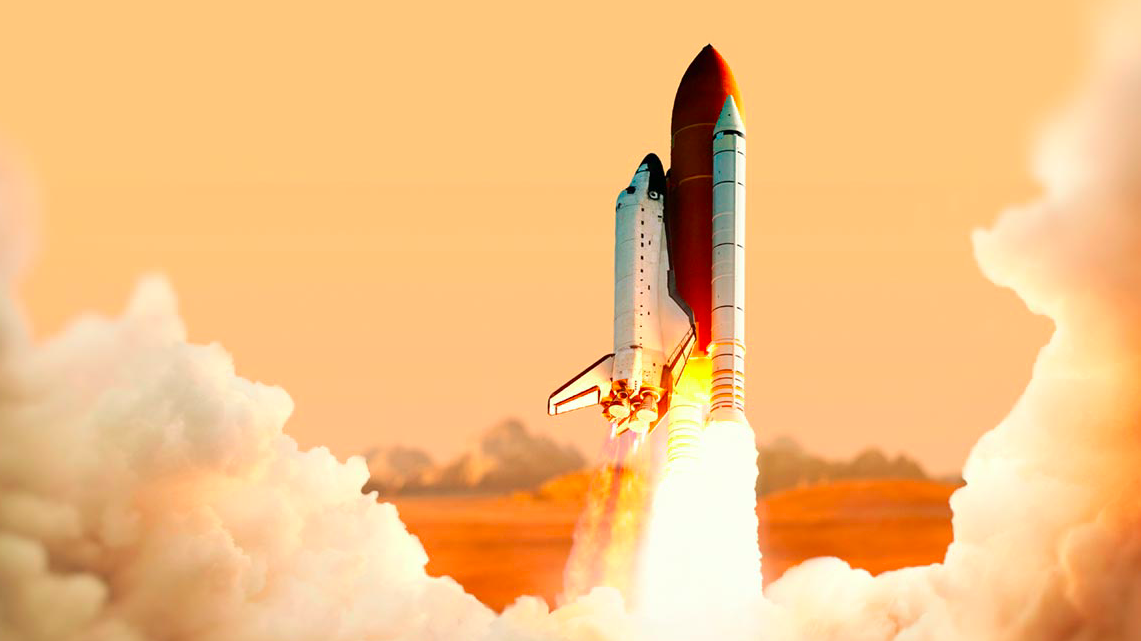 June 27th 2018, northern Sweden. We gathered outside on the porch to watch the “blood moon of the century”. The whole family was there for the event, with cheese, snacks, wine and candy for the kids. As a bonus we got to see the Red Planet rise above the treetops. It was a rare occasion. The gathering of the family, that is. What is the thing with space? Why does it capture our imagination and emotion so much? After a relatively quiet phase in the public eye, one thing is for sure: space is back on the public agenda! In force. Let us look back together on space technology, space politics, space music and spacemen.

My first truly emotional encounter with space was a good 25 years earlier. Our infantry unit was practicing night operations when the sky suddenly lit up green. Wow, the major brought green flares instead of red! Not quite. At the edge of space, at the Kármán line 100 kilometers above our astonished faces, the magnetosphere shielded us from the electromagnetic onslaught from outer space. The Northern Lights interrupted our battle plans, and the major, in an uncharacteristic turn of events, called off practice and took the squad for a hike up the nearest hill to get a better view of the show. It was the freakiest of shows.

Don’t be afraid of the man in the moon, sang David Bowie on his self titled debut album, two years before Neil Armstrong took one giant leap for mankind in 1967. The pop icon extraordinaire was never far from space and launched his next album and Major Tom into pop history only a month ahead of Apollo 11. Music was for the longest time one of the few ways we could approach the unfathomable space, and Space Oddity was a spectacular record.

Music and space intersected on another spectacular disc: the Voyager Golden Record. This gold plated copper record with a catalogue of human culture, biology and ambition was sent into deep space on Voyager 1 in 1977. Complete with a map of who we are, our DNA and a map to our home, The Mix Tape of the Gods, floats through nothingness as humanity’s invitation card. A shout into the void, desperately beckoning: is anybody out there?

We humans have been looking to the stars for millennia, at least, with this existential question. One of the earliest recordings of space travel and extraterrestrials is “True History” by Lucian of Samosata in the 2nd century AD. In the novel he visited the moon and found a people at war with the people of the Sun. Italian astronomer Giovanni Schiaparelli observed “canali’ on Mars in 1877 which led to instant speculation. In 1896 Nicolas Tesla suggested that we could contact the people of Mars using his wireless electrical transmission system, and actually thought he had detected a signal at one point. Our fascination with space has always been there, and has evolved over time.

Early space exploration in the 1950s and 1960s was more practical than emotional and focused on the challenge. John F. Kennedy’s speech in 1962 articulated the moon as a beckoning frontier and a pioneering challenge, ripe for capture by a nation with pioneering in its blood. The global competition with the Soviet Union was ever present.

The moon is not a destination, it is a direction, continued Apollo 11 astronaut Mike Collins. In 1989 George Bush Sr. said the ultimate goal was not simply to go there and go back, but to go there and go on. Well, we have not gone back. Perhaps Collins and Bush would be disappointed that no man has set foot on the moon for over 40 years? It makes sense to me. We have been there, done that. Why go back? There is no actual utility of going to the moon, is there?

While NASA no longer sends astronauts to the International Space Station, it’s private entrepreneurs who are pushing the limits of space exploration, and making us look to the sky again. They articulate their motivation for the hard, risky, and in most ways unrewarding enterprise quite differently. Elon Musk, SpaceX founder and CEO, claims that space exploration is a necessity for the survival of mankind. When (not if) World War III breaks out our best bet to save humanity is to ensure “there’s enough of a seed of human civilization to bring human civilization back”. That seed should be planted on Mars. The other Space Baron billionaire, Jeff Bezos, sees space as a place to do our dirty work – mining, manufacturing, and recycling – in order to preserve Earth as a cleaner and nicer place to live. Bezos foresees space stations with millions of workers.

Yet, the most inspiring sales pitch for space is not these rational arguments. It is Elon Musk’s knack for quirky PR. Letting Jonathan “Jonah” Nolan, co-creator of Westworld, edit a short video where SpaceX’s newest rocket, the Falcon Heavy, launches a Tesla roadster into space to the tunes of David Bowie’s Life on Mars, is nothing short of communication genius. We get to see cheering crowds of people gathered around Kennedy Space Center, children with binoculars, a dummy astronaut named Starman, and a Voyageresque message etched into the circuitry: “Made on Earth by Humans”. As to the why of this movie Elon Musk tweeted:

Why Falcon Heavy & Starman? Life cannot just be about solving one sad problem after another. There need [sic] to be things that inspire you, that make you glad to wake up in the morning and be part of humanity. That is why we did it. We did [it] for you. – Elon Musk on Twitter, 2018

So, space is our hope and our existential fear. A muse for the greatest pop icons. Space is also our challenge and frontier, worthy of our finest engineers. It is certainly back on the agenda, in part thanks to bold entrepreneurs with spectacular vision and intelligent machines. What more? It is without doubt politics. Not everyone is pleased with space exploration and the undertones of going to Mars to save the human race. The Apollo program had its own share of critics. The main point was that spending billions of tax dollars on rockets was a sad priority when there were more pressing needs here on Earth – inequality, poverty, hunger, war. Gil Scott-Heron quipped in the introduction to Whitey on the moon: “I wanna give credit where credit is due”.

The present day launch of Falcon Heavy, and the accompanying live stream watched by millions, earned opprobrium in new ways. To some, the privatization of space exploration signals billionaire escapism in a very tangible way, while the poor masses are left on a boiling Earth. Although it might be a bit unfair to demand of engineers Bezos and Musk to solve Earth politics when politicians cannot.

The Cold War space race is over, and clearly winning space ahead of the Russians is perhaps not as motivating. Still, the United States of America is getting a Space Force, according to president Donald Trump! The idea of a Space Force, despite it sounding like the prologue of a sci-fi film, has been floating around since the late 90s. I suspect the reason to bring it to the forefront now is that it still captures the minds of voters, telling a story of power, strength and technical advancements.

One thing is for sure. Space is not good business. Financially speaking it is nothing short of a black hole. The US space programs have cost some 500 billion dollars of present day tax money. Critics say private space projects only seem to surface when men, who had space on their mind as boys, come into significant money. Or government. Musk and Bezos have already been mentioned. But did you know Paul Allen of Microsoft also has a space company; Stratolaunch Systems Corp? Richard Branson is chairing his Virgin Galactic. Bezos, currently the richest man on Earth, says he divests a billion USD of his Amazon stock every year to fund his space venture Blue Origin. As we ride the fumes of the longest bull market in history, there is certainly an element of newly created private riches looking for increasingly long shot investments. And what is farther out than space? Supporters admire the fact that these private fortunes are diverted into something useful for mankind. I guess it depends on how you define useful, in contrast to for example the Bill and Melinda Gates Foundation.

To the man on the street space is first and foremost entertainment. Few things capture our imagination as the Star Wars saga, and the story permeates back into reality. For example, in October 2007, NASA launched a space shuttle carrying an original lightsaber from the Star Wars set into orbit. You already know the SpaceX line of rockets are named Falcon. There is also the Yoda purpurata, a species of acorn worm. Ronald Reagan’s Strategic Defense Initiative, a shield of lasers and missiles to intercept incoming missiles, was quickly labeled “Star Wars”. In England and Wales almost 400,000 people stated their religion as Jedi on their 2001 census forms, surpassing Judaism and Buddhism. In Brighton, England 2.6 percent claimed to be Jedi.

There have been several crucial technological advancements lately. Tales of mechanical men, golden robots and clockwork automatons turning from fiction into science, through the pioneering work of Alan Turing in the 1950s to today’s deep learning algorithms. You see, an essential part of deep space exploration is robotics. Sadly, we humans cannot keep up with our own imagination and ambition in the flesh, despite the Final Countdown. To build Martian bases, mine asteroids and explore lightyears of deep space, intelligent machines are a necessity. Oxygen-sucking, carbohydrate-eating mensch just don’t cut it. We need robots that perform complex tasks autonomously, and even replicate themselves. Today, as artificial intelligence is increasingly becoming a reality and less of science fiction, even the most audacious of plans seem achievable. This is perhaps the clearest driver of the return of space to the agenda. The simple fact that we can do it.

And the fact that new technologies inspire new achievements was clear to another musician, creating a mega hit. Rock band Europe’s The Final Countdown almost never made it out of Joey Tempest’s teenage drawer. He was experimenting on the synthesizer Korg Polysix when he found the famous riff. “Some people think that tech and music are unrelated. But new tech feeds new ideas”, he claimed in an interview. Much later when the song, to the band’s surprise, became an instant hit, Joey commented: “It is so simple, borderline banal, very close to the line.”
Close to the Kármán line perhaps? New tech feeds new ideas. And new ideas feed new tech. That’s not rocket science. What remains to be seen is if we are all leaving together. Or if most of us stay grounded until the next blood moon of the century.

We’re leaving together,
But still it’s farewell
And maybe we’ll come back
To Earth, who can tell?
I guess there is no one to blame
We’re leaving ground
Will things ever be the same again?
It’s the final countdown
– The Final Countdown, Europe, 1986