Since the Academy opened in January 2013, over 400 reporters and middle and senior managers have attended its courses, seminars and workshops.

“The demand is high and the feedback is good,” says Erik Sønstelie, Head of Schibsted Journalism Academy.

The most recent course was awarded a score of 5.5 out of a possible 6.

Participants said that the course had been relevant, inspiring, and “spot on”.

Sønstelie thinks that is also the reason why so many are now applying for the courses.

Schibsted Journalism Academy wants to bring Schibsted’s tradition of quality journalism into the new digital age, and to achieve that it brings in top national and international speakers and course instructors.

“We want to give the reporters and senior editorial staff the best possible digital tools to work with. We want to help Schibsted’s media houses continue to deliver world-class journalism,” says Sønstelie.

The students meet between four and five times during the six-month courses at one-day or two-day seminars.

Only a few weeks ago The Guardian’s recently recruited data journalist Helena Bengtsson led one of the courses.

After spending two days learning about databases and programs, the verdict of the class of 15 investigative journalists in Oslo was “extremely interesting”.

In addition to the master classes, the Academy also runs one-off events such as breakfast meetings, workshops, and seminars in Sweden and Norway.

“We also arrange activities in conjunction with the Nordic Media Festival, the SKUP conference and Sweden’s equivalent Gräv” says Sønstelie.

The Academy is currently planning a major TV conference and a new master class for video journalists. 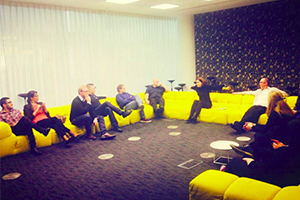 PARTNERSHIP WITH THE GUARDIAN: Schibsted Journalism Academy enjoys a good partnership with The Guardian in the UK. Students taking the course for news editors on a study trip, gathered here in the yellow sofa where the editorial team holds its morning meetings. Photo: BEATE KOREN 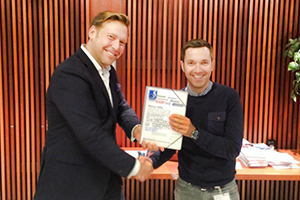 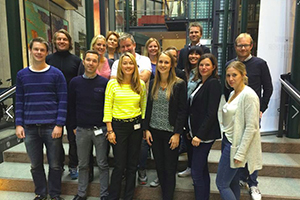 NETWORK BUILDING: The group attending the third course for news editors, at the end of the fourth and final seminar. The Academy tries to get participants to continue discussions and to keep in touch via its Facebook groups and alumni gatherings. PHOTO BEATE KOREN