Aftenposten has been one of 100 media organizations that has had access to the “Panama Papers”, leading up to the publishing of the first stories early this week. 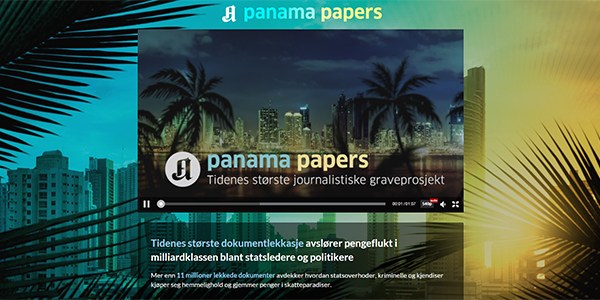 Panama Papers is the name of the biggest document leak ever, comprising more than 11 million documents from a law firm called Mossack Fonseca based in Panama. This is a firm helping people set up companies in tax havens.

During the past six months Aftenposten has been one of the 100 media organizations that has worked scrutinizing the papers, leading up to the publishing of the first stories on the evening of 3 April. Aftenposten has set up a special task force including reporters, researchers, data base experts, presentation journalists and managers. Click here to follow Aftenposten’s Panama Papers project.

The Panama Papers leak is 1500 times the size of WikiLeaks in 2010, and the collaboration between the 100 media organizations is called the biggest investigative journalism project ever. Süddeutsche Zeitung got hold of the documents, which were later shared with Aftenposten and the other through a foundation called International Consortium of Investigative Journalism. Close to 400 reporters have worked on the project.

Publisher of Aftenposten Espen Egil Hansen writes in a column: “The Panama Papers project is an example of a new and needed journalistic method. Even the biggest and richest national media houses are too small to penetrate cases with the degree of complexity that we are facing here. By uniting resources, putting people with key competence from different media houses together and developing tools to analyze big amounts of data, we have achieved something we could not pull off individually.”

The revelations in the Panama Papers has created significant turmoil in several countries. In Norway, it has been revealed that DNB through its Luxembourg branch has helped customers set up accounts in the Seychelles. DNB now faces strong criticism from politicians, and the CEO Rune Bjerke says that “the Bank should not have conducted such activity”, and the bank expresses regret that the activity was not “discovered and terminated” earlier.

In Iceland, people marched the streets to demand the resignation of the Prime Minister, as the Panama Leak shows that an offshore company owned by the Prime Minister’s wife held significant investments in bonds of major Icelandic banks. Other prominent politicians that are mentioned in the stories coming out of the Panama Papers are Vladimir Putin and 11 other heads of state as well as more than 100 other politicians.