Today’s talented photographers still need to be where things are happening, to capture those momemts, and to document reality. But the film rolls and hats have disappeared!

Arild Kveldstad, head of Aftenposten’s photography staff, has written this little anecdote on the everyday life of photographers past and present.

When Aftenposten’s photographers gathered to pose for a group photo in 1963, the north end of Bislett, Oslo’s legendary sports stadium, was perhaps not such an odd choice of location. In those days, speed skating championships filled the stands, and Aftenposten was of course there to cover the events. During the international tournament against the Soviet Union that year, new world records were made by almost every pair – and best of all was Knut “Kupperen” Johannesen with 7.37.8. “At first I didn’t believe my own watch,” said the legendary speed skating commentator Per Jorsett.

Aftenposten’s photographers wore – as the fashion of the day dictated – overcoats and hats, they were all men, and their cameras came from Leica, Hasselblad, and Rolleiflex, not to mention those massive Speed Graphic cameras that were still in use at that time.

This picture has acquired iconic status in Aftenposten, and hangs outside the elevators as a reminder of the newspaper’s history and tradition.

Today, however, it’s major athletics meetings rather than speed skating tournaments that draw the crowds to Bislett. It is therefore fitting that today’s Aftenposten photographers – including Signe Dons as the only female – should gather at the same location fifty years later.

The hats and film rolls have been replaced by digital Canons and Nikons and – not least – video cameras. And the photographers no longer rush back to their dark rooms to develop their films and run off copies. All images and videos are now transmitted directly, either from cameras or via Mac laptops.

But now as then, Aftenposten’s talented photographers still need to be there where things are happening, to capture those moments, and to document reality. 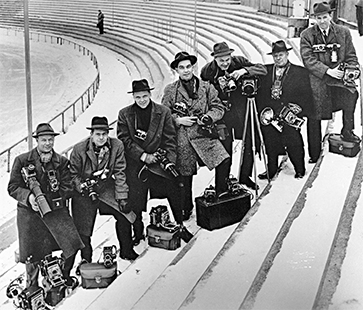 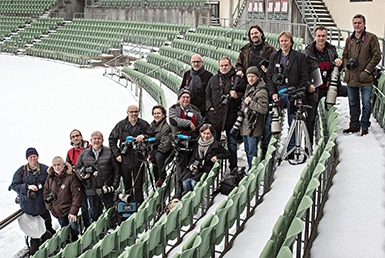