Aftenposten’s #DearMark initiative was voted top for “Best Use of Social Media”, “Best European campaign”, and the main “Best in Show” prize. Schibsted’s  media companies also received five other awards at the prestigious INMA Awards on Tuesday 23 May.

The open letter to Mark Zuckerberg by Espen Egil Hansen, Editor-in-chief of leading Norwegian newspaper Aftenposten, explaining why he would not comply with Facebook’s requirement to remove the iconic photo of the “Napalm Girl” from Aftenposten’s fan page, scooped three major awards, including the top prize, at this year’s International News Media Association Awards.

“The relationship between traditional media and the new global platforms is one of the most important discussions in progress. That’s because it’s about the future of journalism”, said Espen Egil Hansen at the ceremony in New York late last night.

“The letter I wrote to Mark Zuckerberg was about this relationship. It was a kind of protest letter that launched the discussion internally in Facebook, but also in the world – about how to deal with these platforms. Getting this prize means that the discussion got much attention and was timely”, he added.

“The role of journalism is to influence thinking and Aftenposten influenced the world beyond Oslo in a powerful way by simply doing good journalism”, one of the judges said.

The jury also deemed the campaign highly relevant in today’s confusion between news and fake news.

The International News Media Association Awards have acknowledged the world’s best and most innovative news media campaigns since 1937. This year saw 655 entries from close to 200 media companies in 36 countries. The competition was judged in February and March by an international jury of 44 executives from 17 countries representing the worlds of media and marketing. In total, 40 winners were selected in 20 categories.

In September 2016, the Norwegian author Tom Egeland was censored by Facebook when he shared an ionic photo from the Vietnam war in a discussion of photographs that had changed the course of war. Aftenposten covered the story, sharing the photo. Less than 24 hours later Facebook intervened and deleted the article as well as the image.

Aftenposten’s Editor-in-chief Espen Egil Hansen wrote an open letter to Mark Zuckerberg, explaining why he would not comply with their requirements to remove the photo. The #DearMark article became Aftenposten’s most read story in 2016. The story was referred to and debated by publishers around the globe and Facebook ended up changing its policy on newsworthy graphic images. 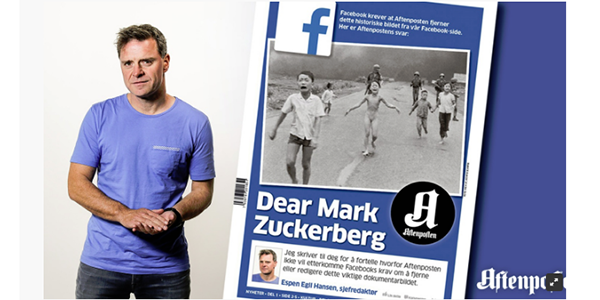