On 1 September Aftonbladet TV will for the first time ever broadcast an election debate between Sweden’s parliamentary party leaders on online TV.

“It’s very exciting to lead the first large party leader debate ever outside the traditional television houses. Our ambition is to give it a tabloid feel – sharp but with good humor,” says Karin Magnusson, Presenter at Aftonbladet TV.

Aftonbladet’s debate will be the first televised debate between party leaders in the run-up to Election Day on 14 September. The debate is led by Karin Magnusson, who last year hosted Partiprogrammet, a current affairs program that is broadcasted live every week with leading politicians and commentators.

The debate will focus on five areas that young voters have identified as particularly urgent. Within the framework of Sverige Tycker, Aftonbladet and Schibsted’s opinion panel in collaboration with research firm Inizio, young people have given their opinions on the political issues that are most important to them when they vote. The topics that the young swedes have chosen will be presented in all of Aftonbladet channels before the party leader debate.

“I’m very excited to see the list of topics. Because it is the younger members of our reader panel that selects what the party leaders are going to debate, it will probably differ quite a bit from the more traditional debates,” says Karin Magnusson.
Aftonbladet’s debate between party leaders is broadcasted for a studio audience and will also contain musical entertainment from top artists, just as in Partiprogrammet. 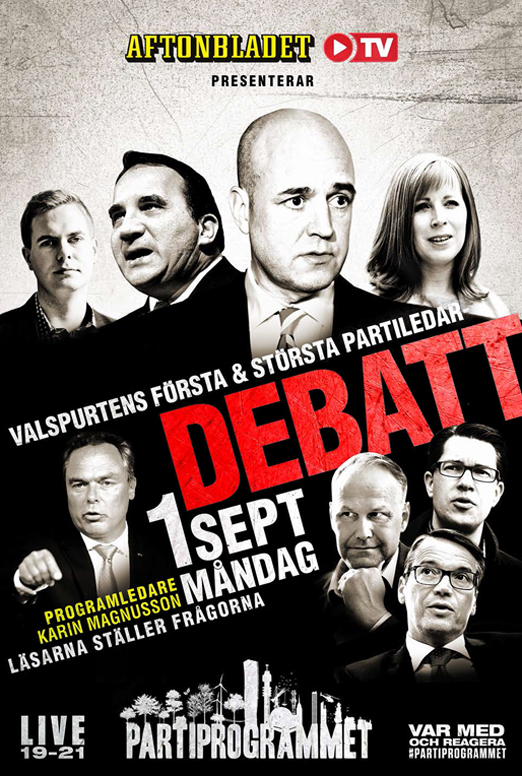