Schibsted’s Norwegian media houses got 16 out of 21 awards at “Media Awards of the Year”. VG was the big winner, including Newspaper and Website of the Year. 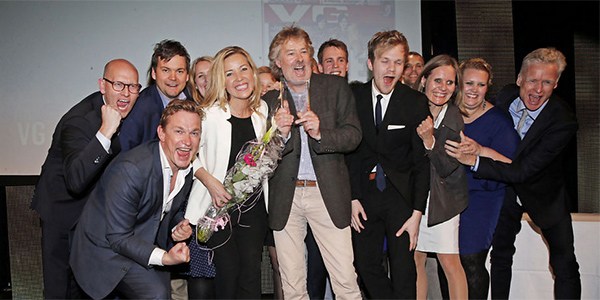 VG was the big winner at the Media Awards of the Year 2015. The media house walked away with eight of the competition’s 21 awards at last night’s prize ceremony, including Newspaper of the Year and Website of the Year. The Aftenposten K culture magazine was named Magazine of the Year.

“A traditional media group such as Schibsted is founded on quality journalism. A lot of brilliant journalistic work is being done in our media houses and many of our stories set the agenda in the Norwegian public debate and reveal reprehensible conditions. Such journalism is a cornerstone in our democracy. I congratulate all the winners and the other nominees of ‘Media Awards of the Year’ on their outstanding work,” says CEO Rolv Erik Ryssdal.

The Media Awards of the Year are organized by the Norwegian Media Assiciation (MBL), honoring journalism produced in Norwegian media houses. The awards are handed out during the Nordic Media Festival in Bergen every year in May.

On behalf of VG, Editor-in-Chief Torry Pedersen received the award for Newspaper of the Year by the Norwegian Minister of Culture Thorhild Widvey. A total of 788 contributions had been submitted in the three categories newspaper, magazine and digital.

“The level of this year’s competition was sky high, and it was a difficult task to select the winners among all the entries. It’s fun to see how much good journalism that is created in the newsrooms all over Norway,” said jury chairman Trine Ohrberg-Rolfsrud.

In each issue the Magazine of the Year delivers rock solid journalism and an aesthetic representation of the articles. They are constantly finding new ways to present their stories, playing with the possibilities and expression of the magazine format. With depth, quality, breadth and elegance the magazine has quickly made itself important. Nevertheless, it is the journalism that makes the magazine stand out. Long and thorough stories set the standard for how good magazine journalism on paper will survive in the future.

The jury’s statement about the Newspaper of the Year – VG

The Newspaper of the Year is paving the way ahead. The media house is full of creative and enthusiastic people who bleed every day for their uniform. In 2014, one of the toughest years in the media industry, they deliver better than ever, both editorially and financially. The Newspaper of the Year is Norway’s most cited newspaper, and their disclosures have major consequences of social importance. They do everything right, on any platforms, also on the side of their core mission – and in addition they are at delivering news. Thorough quality and storytelling at an extremely high level makes this year’s newspaper by far the best in Norway. Their innovative power, innovations and optimism gives hope for the entire media industry.

The jury’s statement about the Website of the Year – vg.no

In a class of its own on all digital platforms. Develops niche websites at an international top level, also without tying them to the brand name. They deliver news continuously 24/7 and utilize the uniqueness of the Web to the fullest. They play with narrative techniques and expressions in an exemplary manner. They show the way in how the future of journalism will be digital, and are at the same time able to create new revenue streams with journalism as a starting point. With enthusiasm, pride and a twinkle in the eye they set the standard for all websites in Norway – and in the world. Impressive!

See all the winners