Schibsted NextGenProducts, which focuses on developing the news services of tomorrow, is looking for 2,000 beta users to test its Next news app in Norway. The app aims to help news readers understand current affairs. 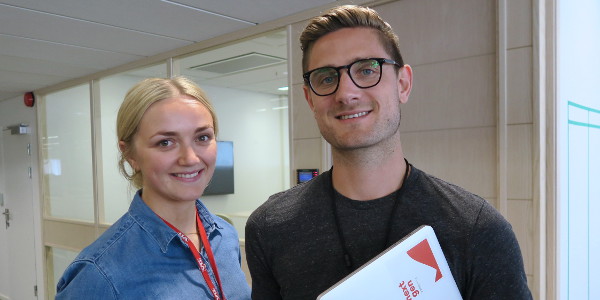 “I think many people are reluctant to form an opinion on current affairs because they either don’t know enough about the subject or don’t understand it,” says Vilde Mebust Erichsen (24), a journalist working for Next.

Currently, a small Schibsted team is busy developing a brand-new news app that is intended to help people just like these.

Right now the team is stepping up beta testing and is looking for users aged between 18 and 25 who speak Norwegian.

“Although the app is aimed at young people, this apprehension about not being able to take part in everyday discussions with colleagues and friends is something a lot of people feel. I know I’ve felt it myself – and I work on news stories every day,” says Vilde.

The team currently has 13 members, including five editorial staff and a group of journalists, developers, researchers and designers.

So is this simply a case of yet another news app?

Working closely with the target group to become sufficiently unique

“Ever since the start-up stage, we’ve had close and continuous contact with potential users in the form of in-depth interviews, monitoring of core users, lab testing and guerilla testing in universities. This has helped us define a core target group – we called it ‘Ida’ internally – which in turn makes it easer to create a clearly defined product that should meet some highly specific user needs,” says Andreas Bøhler (31), a UX designer in Next.

It has taken some time to define the core user and identify what drives ‘Ida’. But now the team is fairly confident that their app clearly stands out from all the news media currently available in Norway.

“As we see things, no service currently exists that can help ‘Ida’. ‘Ida’ does not place priority on reading news, and often only flicks through news updates once a day or maybe even less during the course of a week. What’s more, ‘Ida’ is not that interested in politics or international affairs, but still wants to keep up-to-date in order to take part in discussions going on around her. That’s where this app comes in. We can help ‘Ida’ gain an overview and knowledge in a complex and vast stream of news stories,” says Vilde.

The news stories in the app are reported in the form of oral and visual presentations, using lots of images and videos. Journalists talk to – and with – the users. The use of emojis and gifs is all well and good, but must be evaluated individually.

“In the user tests we saw how the younger users had a need for an alternative to today’s traditional digital news reporting. For example, they’re more positive towards dialog-based news reporting. It felt completely natural to them,” says Vilde.

A key part of Vilde’s job involves curating and editing news stories from Schibsted’s media houses inside the app.

“My job as curator feels very meaningful. I think many people may well try to form an opinion on current affairs, but they soon discover how time-consuming it can be to dig deeper into complex issues. This app can help them with this,” says Vilde.

So far the app has only been available to an exclusive group of beta testers, but now the team is looking to expand.

“We’ve recruited some, but now we’re stepping up. We can mange up to 2,000 beta users, but if everything goes according to plan the app will go public this autumn. We will still continue development, though. Among other things, it will be made even more personalized – though without creating filter bubbles in the process”, says Andreas.

‘Next’ – only a working title

Although ‘Next’ is the current name given to the app, it is unlikely to be the name of the final product. The work on finding the final name for it will begin after the summer. This process will also involve users.

Are you aged between 18 and 25, speak Norwegian and fancy beta testing Next? You can register here.

A version of this story was first published on kampanje.com. Read the original article (in Norwegian).