FINN’s CEO Sondre Gravir recently gave a presentation at the NHO annual conference on the changing labor market, opportunities and challenges that we are facing. 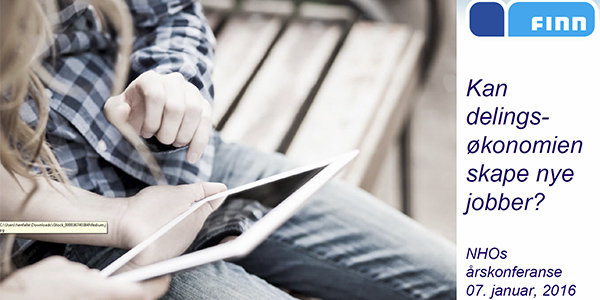 “The new Labor Market” was this year’s theme at     the NHO Annual Conference (Confederation of Norwegian Enterprises). Finn.no’s CEO,Sondre Gravir, held a presentation on opportunities and challenges for Finn Small Jobs, which was launched 18 months ago. According to Gravir FINN Small Jobs is doing the same with the skilled trades industries, the creative industries, education and domestic chores as Uber is doing with the taxi industry and Airbnb with the hotel industry.

“Our motivation behind FINN Small Jobs was the changes we saw the sharing economy was creating in society,” said Gravir.

“The changes created by the sharing economy and job platforms are enabling more people to participate in the labour market, they are a springboard for the unemployed and inexperienced, and they are a catalyst for entrepreneurship. So let’s embrace and facilitate them rather than fight them. It can be done!,” continued Gravir.

Here is the transcript of Sondre Gravir’s presentation at NHO’s annual conference:

I would like to talk about the changing labour market by telling you a bit about FINN Small Jobs and about the opportunities it creates and the challenges it presents.

We launched FINN Small Jobs around 18 months ago. Our motivation was the changes we saw the sharing economy was creating in society. Today lots of people are talking about the sharing economy, and they use a lot of foreign words to describe it. Well actually, I think it’s quite simple; people have been sharing goods and services since time immemorial, but new technology solutions are now creating platforms that make it so much easier. And we want this, because access trumps ownership. It’s as simple as that!

Today we are seeing collaborative services grow within four main areas: production, education, finance, and the sharing of goods and services. And it is within the latter of these that we find many of the biggest and most talked-about platforms, such as Airbnb.

One thing we all need to acknowledge is that no matter where we work, these trends will have a fundamental impact on our business and business models. Anyone who fails to acknowledge this, will lose. And personally, I think it’s fascinating to hear traditional actors in different industries persistently deny that these new competitors actually exist. If they continue to so, they will quite simply be exposed to disruption because they will fail to realize and acknowledge it before it is too late. The new actors are outsiders, and have nothing to lose; the established actors become blind and faint-hearted because they have too much to protect. New actors will often be highly goal-oriented, and will attack the part of the value chain that is most profitable and most ineffective – and they will probably give their users a smoother, more seamless experience.

Those same actors are also creating huge changes in the labour market.

So for those of you who are not familiar with the service: what is FINN Small Jobs?

To our mind, FINN Small Jobs is doing the same with the skilled trades industries, the creative industries, education and domestic chores as Uber is doing with the taxi industry and Airbnb with the hotel industry.

FINN Small Jobs helps match people who need help in everyday life with people who can help them. People who need a task done post an advertisement free of charge describing the job they need done, and those who want to help must pay in order to contact the job owner. The job owner assesses all the profiles of the people who get in touch with offers of help, and then selects one of them to do the task.

Once the job is done and paid for, both parties can rate each other, thereby building digital trust on the platform, one that replaces the trust which today is created through conventional branding. The service has grown significantly in the space of 18 months: in 2015, 450,000 users visited the service, 50,000 jobs were published, and 93 percent of the jobs announced elicited a response.

Why are all these people using this service?

We have close dialog with our users and are learning a lot from it. If we start by looking at users who outsource tasks, they can be divided into four types: they lack the necessary skills; they don’t have the time; they want more leisure time; or the task is too physically demanding.

Because the labour market is changing. It’s not only small tasks – like the ones we see examples of here – that get done via FINN Small Jobs; a growing number of tasks requiring special expertise are also being resolved here. And many people use FINN Small Jobs and other job services to earn their living. A study of Uber indicates that around 25 percent of drivers rely on Uber as their sole source of income. Others do it so supplement their primary source of income; because the sharing economy and the new type of job-matching platforms like FINN Small Jobs generate new jobs.

The open talent economy is undergoing strong growth. In the United States, close to 50 percent of the labour force will be defined as freelancers in five years’ time, and in the four most densely populated EU countries – Germany, France, Italy and the UK – atypical forms of employment are becoming the type of employment arrangement showing strongest growth. We constantly read headlines like “Will freelancing be the new normal?”, “Permanent jobs are for losers”, and “Surfing on the sharing wave”, etc. And I am convinced that this trend will grow stronger in the time ahead. New technology will replace many of today’s jobs, but new jobs will be created, which in turn will help us use human resources even more effectively.

We must not be naive: these types of services and the changes in the labour market are creating new challenges we need to resolve. And in FINN we’ve been working on how to do that from day one. We want to ensure that our users comply with Norwegian law. As a platform, we are not party to the transaction between job owner and helper; our role is to facilitate it. But we see a number of challenges for users of FINN Small Jobs which we are actively helping them to resolve. And that is vital now that the service is growing so big.

I note that some high-profile politicians, union leaders and captains of business and industry keep telling us that we need to put a stop to this trend. I say to them: seriously, wake up. History has shown us enough times that changes that are driven by a combination of technology shifts and consumer demand; well, those are changes which we cannot – and should not – stop. We need to do the opposite: we must actively support those trends and adapt regulation accordingly. The changes created by the sharing economy and job platforms are enabling more people to participate in the labour market, they are a springboard for the unemployed and inexperienced, and they are a catalyst for entrepreneurship. So let’s embrace and facilitate them rather than fight them. It can be done!

Meanwhile, here at FINN we will continue our efforts to make FINN Small Jobs a little bit better every day.