Our Media and Marketplaces divisions both recently made changes to their management teams.

“Following a substantial reorganization of our company at the end of 2017, where Schibsted was divided into two business divisions; Marketplaces and Media, it is natural at this stage to adapt the management teams to the organizations and their development,” says Rolv Erik Ryssdal, CEO Schibsted Media Group. The changes are as follows:

Schibsted Media is now being structured according to three main areas:

Tina Stiegler will start in her new role immediately. Monica Nordvoll Leidland will temporarily hold the role as as CHRO for Schibsted Media Group.

With these changes Raoul Grünthal, Head of the Schibsted Media division, has established a new leadership team called the Media Executive Team (MET). MET will be made up of the new business area managers above, along with Finance, Jørgen Konradsson and Legal, My Goland. Today’s Media Leadership Team (MLT) will now serve as an expanded management team,

The complete overview of the Media management team can be found below:

CEO of Schibsted Marketplaces, Sondre Gravir, has made the following changes to his management team (also called M1):

– Gianpaolo Santorsola, formerly the M1 leader for Mature Markets, has been appointed CEO of Schibsted Spain. Gianpa will have a new Spain and Brazil Management position, responsible for Spain as CEO and for Brazil as Asset Owner. Previous Schibsted Spain CEO, Estanis Martin de Nicolás, resigned this spring due to family considerations, with effect as of 1 July. Olivier Aizac, who managed a handful of our marketplace assets, also left the company this spring to pursue a new leadership opportunity in Brazil.

Ovidiu Solomonov will take on leadership of Italy, Austria, Ireland, Hungary and Colombia. His area will now be called Global Markets.

Lastly but not least, Sweden will now report into Anders Skoe, CEO of Norwegian Marketplace FINN. This means that CEO Jan Prokopec, now reports into Skoe, who represents Sweden and Norway in the Marketplaces management team.

“Spain is a very promising market for us, with very strong growth opportunities – and given its importance in our portfolio and the positive experience from having operational CEOs represented directly in the M1 team, this was a natural change without increasing the size of the marketplace management team,” says Gravir.

“I am confident our new setup will make us stronger. We’re seeing great progress so far in our new Marketplaces division. As an agile organization we will evolve continuously so that we’re always ready to grab the next opportunity,” adds Gravir.

The complete overview of the new Marketplaces management team can be found below: 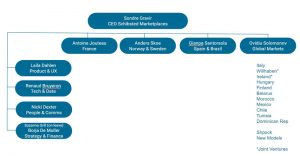