More than 500,000 digital-only subscribers underline shift in how news is consumed and monetized. 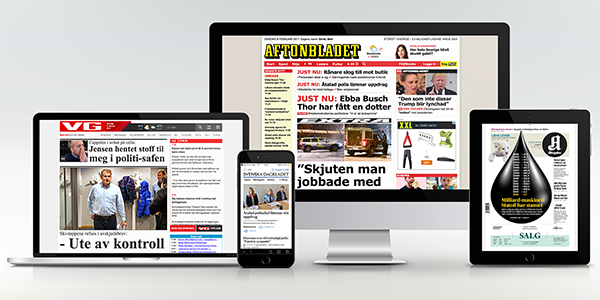 OSLO, NORWAY ­– February 8, 2017 ­– Schibsted Media Group, an innovative leader in media and marketplaces, today announced that in 2016 it surpassed 510,000 digital subscribers at its media houses in Sweden and Norway. This corresponds to more than 34% growth during 2016.

“We’ve long believed that consumers will pay for quality digital content, be it music, TV and film or great journalism, and it’s heartening to see that they agree,” said Rolv Erik Ryssdal, CEO, Schibsted Media Group. “While we are excited by these numbers, it is worth bearing in mind that the media business is still finding its way in the online world through both subscriptions and advertising, so we have to keep a vigilant focus while our online business models develop and mature.

“Premium content has been a major focus for our media houses this year and it has generated a record number of new digital subscriptions,” said Didrik Munch, CEO, Schibsted Norway. “Our digital subscribers tend to be younger, which positions us well for the future. I’m proud of the team, but of course we cannot rest as we guide our newspapers through the hardest transition they have ever faced.”

“Aftonbladet has had a strong digital-first position for many years, and now we see that Svenska Dagbladet is also making great strides,” said Raoul Grünthal, CEO, Schibsted Sweden. “The key for us has always been to couple our great journalism with business models that correspond to how consumers access content today.”

Schibsted Media Group is an international media group with 6,900 employees in 30 countries. From Norway to Malaysia, from Brazil to Sweden – millions of people around the world interact with Schibsted’s popular digital services every day. In Scandinavia, our media houses such as VG, Aftenposten, Bergens Tidende, Aftonbladet and Svenska Dagbladet keep people informed and updated on important issues in society. Our digital marketplaces such as Finn.no, Blocket.se and Leboncoin.fr help people buy and sell new and old things. In addition, our growth companies such as Shpock, Let’s Deal and Compricer provide our users with popular, digital consumer services that make their everyday life a bit easier. Together, this fulfills Schibsted Media Group’s mission of ‘Empowering people in their daily life’. Learn more at www.schibsted.com.