On Wednesday 23 November Negra Efendić and Karin Thunberg won the finest awards a Swedish journalist can receive, at the “Stora journalistpriset” ceremony. 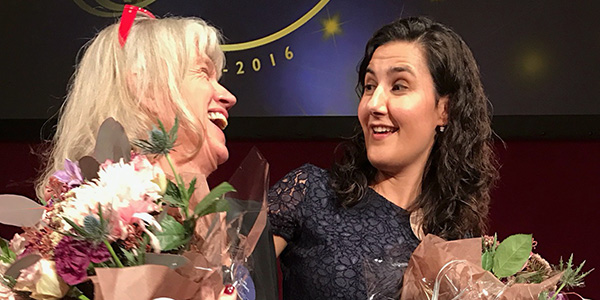 Rarely have two SVD employees received so many hugs in one single night. All 280 guests in the 50-year jubilee of the award gala in the Stockholm Grand Hotel’s beautiful lounges wanted to give Negra Efendic and Karin Thunberg their tributes. Everybody agreed that the election of Karin as a recipient of “Lukas Bonniers Big Journalism Award” and Negra as the winner of the title “Storyteller of the Year” was as spot on as well-deserved.

Read SvD’s own story on the two winners

“After 45 years in the media industry it feels absolutely wonderful to get the “Nobel Prize” of Swedish journalism. First I won the “Best style writer of the year” award last spring, and now this. It feels like winning the Olympics and the World Cup in the same year,” said an extremely pleased Karin.

“I never thought I would win. It feels both amazing and fun – and a true honor, yes, it’s absolutely fantastic! I never got to thank all the amazing SvD colleagues while I was on stage, but they have pepped and supported me when things were hard.

Yesterday’s awards were SvD’s 12th and 13th prized in Stora Journalistpriset since 1977.