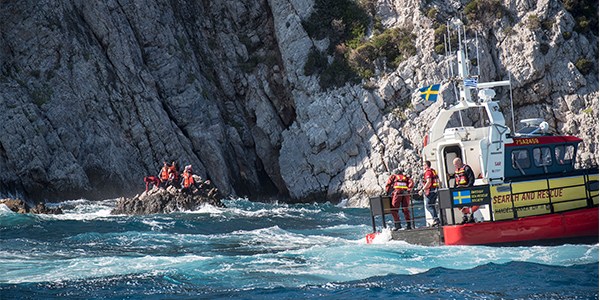 A group of weary sea rescue volunteers arrived at the port of Samos Wednesday afternoon. They had spent the whole day at sea saving lives. The alarm came Wednesday morning from the Greek coastguard. A couple of refugee boats had capsized just off the Samos coastline. The high winds and the fact that the boats capsized in shallow water close to land prevented the Greek coastguard from launching their boats.

Around thirty people were already in the water by the time the Swedish Sea Rescue Society reached the scene in their “Gula Båtarna” (yellow boats). Nine people, among them several children, were stranded on an inaccessible skerry, soaked from the strong waves.

“I don’t know how many would have survived if we hadn’t been there,” says Andreas Arvidsson, captain of one of the boats and head of operations in the Swedish Sea Rescue Society.

“My god, it’s so good to be making a difference.”

He is exhausted, resolute yet quite exhilarated and proud, though profoundly affected by what he’d experienced that day: probably the largest single rescue operation in the history of the Swedish Sea Rescue Society is over.

Andreas shows us one of the boats. The mats are being washed down after many of the refugees vomited on their journey to safety in the port of Pythagorion.

“There were people all over the place,” says Arvidsson while we descend into the narrow space below the bridge. Around thirty rescued refugees were cramped into this room, which measures around 2 x 4 meter.

One man had cut his leg badly and was given first aid treatment.

Two of the children were given CPR.

Another man was searching desperately for his wife and children.

Although the scene seemed chaotic, Arvidsson described it as surprisingly calm.

Ambulances were standing by in Pythagorion. The most severe casualties were taken directly to hospital. The rest of them had to wait. There on the dockside, the desperate man was reunited with his wife and children, who had been rescued by the other boat.

“The husband kissed and hugged me. He didn’t want to let go of me. He was so happy and grateful for our efforts,” says Arvidsson.

“I’ve never been so emotionally moved in my life. It went straight to my heart.”

Immediately after their arrival in Samos, the crew underwent a debriefing, which Schibsted’s personnel on board also attended.

This part of the article is based on an interview with Magnus Ringman in Aftonbladet, written by Erik Wiman. .

So far more than SEK 1.9 million has been raised for Schibsted Sverige’s campaign called Gula Båtarna (The Yellow Boats).

Magnus Ringman, who is heading the project, is grateful for all the donations that made Wednesday’s rescue operation possible.

“It shows that the money is getting through and making a difference between life and death,” he says.

The Swedish operation in the Mediterranean on Wednesday would had never taken place if it hadn’t been for an idea that was launched in Schibsted Sverige’s head office, Schibstedhuset, in early autumn.

Faced with the stream of news stories about the extreme refugee crisis, the staff began asking what Schibsted could do to help besides reporting.

“Then the idea came about putting rescue boats in the Mediterranean. I contacted the Swedish Sea Rescue Society and said: ‘You can save lives, we have the audience – what can we do together?'” says Ringman.

This week was the first time they were used in a situation involving live ammunition as they left the port to aid forty-six people in distress at sea.

“Of course it’s a success for the project. At the same time my thoughts go to those two young children who didn’t survive in the water. Overall, it shows very vividly that the money is being used here.”

Companies, organizations and private individuals have so far donated around SEK 1.8 million. Magnus Ringman hopes that the money will continue to come.

“Once the money runs out, the boats won’t be able to stay, and then rescue operations like the one today just won’t happen.”

What was it about all the reports on the refugee crisis this autumn that touched you most?

“Aftonbladet’s exposé about the life vests stuffed with paper being sold to refugees aroused a lot of anger. Robert Aschberg’s interview with the man who lost his family last week really got to me.” 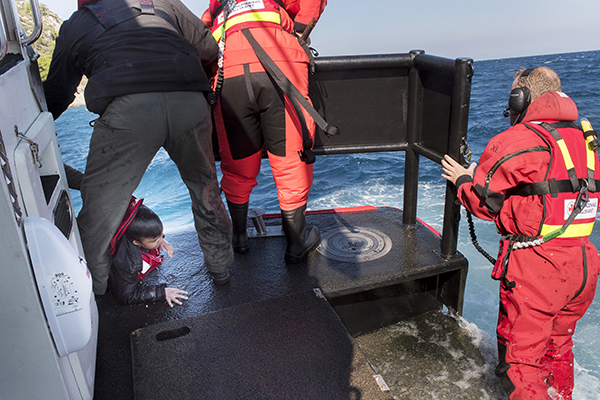