VGTV’s coverage of the World Chess Championships generated 6.4 million views in Norway. This is a fantastic figure, says Managing Editor in VGTV.

According to Ola E Stenberg, Managing Editor in VGTV, the success can be put down to the fact that they had correctly anticipated Norwegian viewers’ interest in following Magnus Carlsen’s bid to win the title. 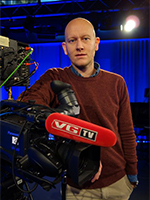 “When it started, we had a full set-up of broad journalistic coverage on standby: one team in India and one in Norway, good articles, daily live broadcasts, a documentary on Magnus Carlsen, a VG Direkte center for chats, info on all the moves, a chess computer calculating the chances of winning and the best moves, and more,” says Ola E Stenberg, Managing Editor in VGTV.

It is worth mentioning that VG’s documentary on Magnus Carlsen, Last Big Title, has currently drawn 700,000 views. VG has never before been close to a figure like this for a self-produced documentary.

The readers decided the front page

VG let its readers decide how it should pay tribute to Magnus Carlsen on the newspaper’s front page. More than 45,000 votes poured in during the four-hour voting period.

One of those who voted was Magnus Carlsen himself.

“That’s so cool,” said Carlsen, pointing to the front-page photo taken after he was thrown into the hotel swimming pool fully dressed, when VG’s Editor-in-Chief Torry Pedersen shows him the four first pages.