In Spain, more people than ever are finding a job through InfoJobs. See how the employees share their happiness in a video called Let’s Work!

InfoJobs has just released two reports on its leading job vacancies’ activity in Spain: A study on employment contracts signed in 2013 through Infojobs.net, and InfoJob’s Annual Report on the State of the Labour Market in Spain.

The publication of the two reports contribute to InfoJobs status as a benchmark institution for employment and information on the Spanish labour market.

406.262 employment contracts were executed in 2013 on Infojobs.net,  which is five percent more than in 2012. This figure is particularly relevant when considering the difficult financial situation and the unemployment crisis that Spain is going through.

Furthermore, all the contracts executed through InfoJobs’ portal demonstrate that a new step towards the mission of SCM Spain is becoming a reality, which is to be “The top-of-mind job marketplace improving people’s lives”. Therefore this has been a true source of joy for everybody in InfoJobs Spain.

Pleased to know that thousands of people are finding work with the help of the portal the employees in InfoJobs would like to share their happiness in a video called “Let’s Work!”  The video is small sample of what inspires the InfoJobbers to keep going forward. Click below to view the video.

Snapshot of the labour market in Spain

Each year InfoJob releases its InfoJobs ESADE Report: the current state of the labour market in Spain. The report features a variety of current trends, attributes and opportunities through information gathered in 2013 thanks to InfoJobs’ role as Spain’s leading job site.

The study includes information about:

Click here or on the image below to view the report on InfoJobs infographic microsite. 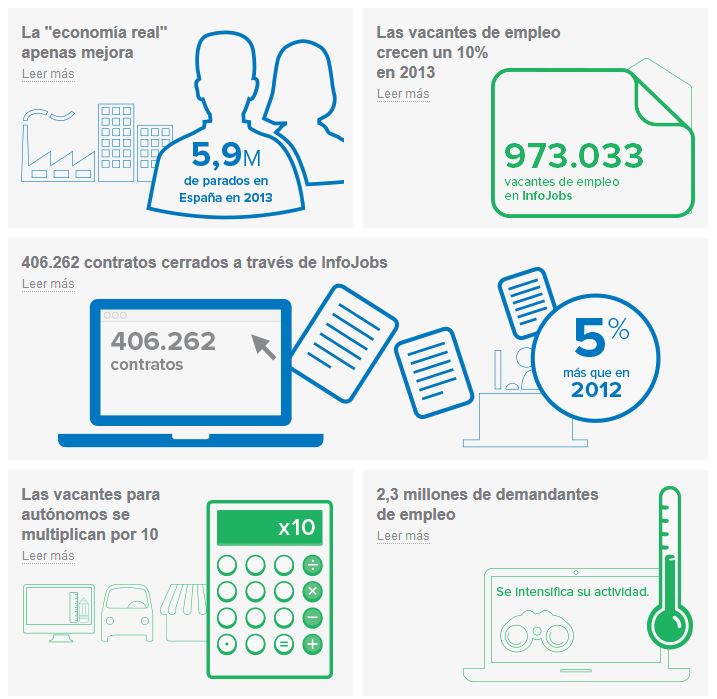