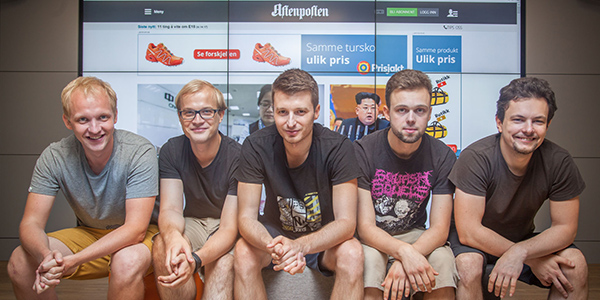 “But because production and presentation was so closely connected, any technical development on one part had to be coordinated with development on other parts,” explains Erik Bonesvoll, Development Manager at Aftenposten.

Especially the mobile version was slow, and both readers and journalists complained about it.

A developer team from Schibsted Tech Polska decided to look at it from a different perspective, wanting to produce a completely new front page for Aftenposten’s mobile site in just one day!

And so they did, naming the project Fastenposten.

“At the end of the day we were able to present a version that was six times faster than the existing Aftenposten site,” says team leader Mateusz Kwasniewski.

Espen Tandberg, Tech Lead in Aftenposten Mobile, persuaded Aftenposten to make a test. In little more than a month they developed a whole new mobile front page for the newspaper.

The scope has gradually grown since then. Bergens Tidende, Stavanger Aftenblad and Fædrelandsvennen joined the project. The same principles were put in use for the tablet versions. Now the team has started redoing also the desktop version. We wish them good luck!