Schibsted’s Italian classifieds site has rebranded to be even closer to the needs and desires of its private and professional users. 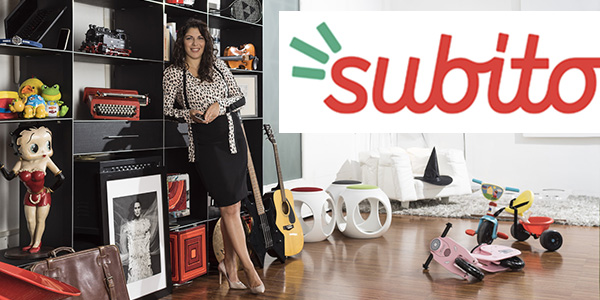 “Subito.it has rebranded into just ‘Subito‘ with the intention to become a ‘loved brand’. After eight years, Schibsted’s no.1 classifieds site in Italy aims to be more friendly, familiar, ‘pop’ and even closer to the needs of private and professional users. The rebranding is part of Subito’s strategy to change the appeal of classifieds in the mind of the Italians, making Subito the top of mind choice,” says Melany Libraro, General Manager at Subito.

Subito’s new and innovative brand image consists of two immediate changes: A new logo, without the ‘.it’ suffix. The removal of the suffix responds to the evolution from a website to a multiplatform service. The simplicity and immediacy are now expressed visually in the new logo with a ‘snap’ or symbol representing a finger  snap through three lines arranged next to the upper-right corner of the brand.

The homepage maintains the unmistakable map of the Italian peninsula, but is now enriched with the six main categories for a more direct access.

To put “everything in order” and to facilitate the navigation, Subito introduces both categories and service icons. Additionally, Subito has expanded the color palette with six new colors in order to look more ‘pop’ and change the tone of voice to enhance empathy. The customized handwritten font is called Flea, just like a flea market.

To launch the brand, Subito has planned a digital campaign structured in two phases consisting of teasing and launch, accompanied by the hashtag #cambiamosubito (#changingsubito). Because Subito is made by people for the people, a video for employer branding has also been published.