FINN.no will facilitate a service for settling of refugees in Norway as a result of collaboration with Red Cross on FINNs annual hackathon, FINNovasjonsdagen. 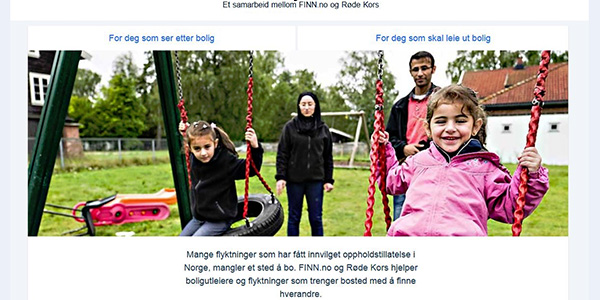 Norway will in the coming years settle a record number of refugees. Over 5,000 refugees have been granted asylum and are ready to be re-settled in a municipality. They are currently waiting in Norwegian asylum centers.

Municipalities claims that housing shortage is one of the main reasons that the settlement takes so long. This means that refugees who have been granted residence in Norway, have to wait unnecessarily long to start their life in a Norwegian municipality.

“When we grant people the right to stay in our country, we have a humanitarian responsibility to ensure that they can get housing and settle in reasonable time, and have the opportunity to be integrated in our society,” says Anette Sørlie Stray, Senior Advisor, Migration and multicultural work, Red Cross.

In late October this year, FINN.no invited social entrepreneurs and voluntary organizations to be part of the annual hackathon, FINNovasjonsdagen. The goal was to solve defined social problems. Red Cross was one of the participating organizations, and challenged FINN to come up with a solution on how to facilitate a service to house and settle refugees who have been granted residence permit. The team, consisting of 12 people from FINN.no and the Red Cross, won 300 development hours to finalize the site and make it ready for launch.

“The opportunity to contribute in solving an important social problem such as settling of refugees, engaged us. We strongly believe that refugees with real protection needs should get a good start on their life in Norway. To be able to live in your own home is an important factor of being integrated, and thus become contributors to society,” says Marte Helene Austdal, system developer in FINN.no and project manager for FINN hjerterom.

FINN hjerterom (“Find heart room”) is a service where you can find information about what it means to rent out housing to refugees, and where municipalities can search for available homes that potential property-owners have indicated that they are willing to rent out. By placing your ad on FINN hjerterom, you show that you are open to rent out to people who have fled their homeland and who have been granted residence permit in Norway. In this way, the process of finding housing for refugees will be easier for local authorities, and for the refugees that are actively looking for a place to live.

“FINN hjerterom is an exciting innovation that contributes in connecting property owners with refugees who have been granted residence permits, and who are desperately waiting for a place to stay to start their new lives. Red Cross is pleased to cooperate with one of the world’s best digital meeting places, which in practice embraces all those who want to lease and those who want to rent housing. FINN hjerterom makes it easier to rent your housing to refugees, while also making it easier for municipalities to find homes for the refugees they must settle, says Åsne Havnelid, Secretary General in Red Cross.

Both the Red Cross and FINN.no have talked to refugee consultants in various municipalities. The feedback was very positive, and the consultants found the service to be easy to use. The team also conducted a survey amongst 700 property owners to find out if they are willing to rent out their housing. 36 percent of the respondents were interested in renting out to refugees, while 39 percent indicated that they were positive, but wanted to know more about the service before saying yes.

“During the process of developing FINN hjerterom, we wanted to involve property owners and parties who work with settlement, to create the best solution to the issues regarding settlement of refugees,” says Marte Helene Austdal.

The site is soft launching on 18 December, and will be fully ready in the middle of January 2016. If you wish to visit the site, go to www.finn.no/hjerterom