The Swedish newspaper industry has launched a joint appeal for the importance of democracy and freedom of expression in favour of free and independent media in Russia and Ukraine. 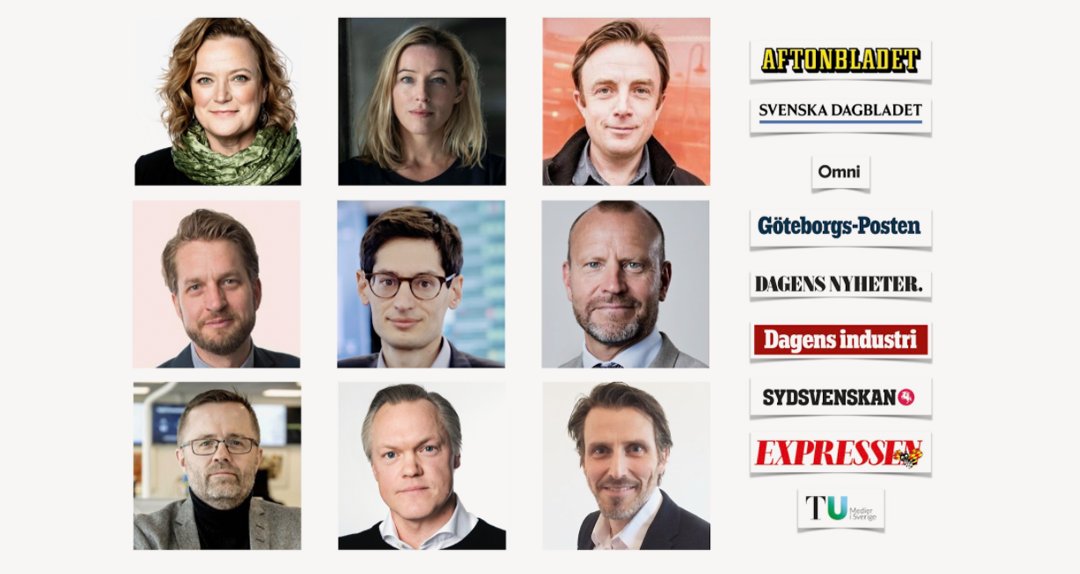 You can read the appeal here:

Journalism – an important weapon in the fight against Russian disinformation

Swedish newspapers in a joint appeal in support of free media in Ukraine and Russia.

On the morning of February 24, 2022, the world woke up to the news that a brutal war was shaking the European continent once again. Since then, the Russian state has done everything in its power to silence and restrict free independent media from reporting on what is happening in Ukraine and Russia.

With this joint appeal, publishers across Sweden want to show our sympathy and support for the independent media operating in Ukraine and Russia. This call will be published in Swedish, Russian and Ukrainian, and spread through the various media companies’ social media channels and front pages.

We received the news of the Russian attack with dismay and great concern. As publishers, we are already particularly concerned about the way in which Russia is trying to restrict freedom of the press and freedom of expression. Now, suppression has been increased to prevent independent news coverage from the fronts. By threatening to shut down news outlets that do not follow Russian propaganda, the authorities are showing how far they are prepared to go to restrict people’s right to free and independent information. With this appeal, we also want to show our support for all those who exercise their right to express themselves: journalists, artists and people who take to the streets and demonstrate against the invasion – in Russia as well as in Ukraine.

Several Swedish newspapers are on-site in cities such as Kyiv, Kharkiv, Lviv, Polish border cities and in Russia. They are now doing their very best to convey news accurately and truthfully. It is a challenging, difficult and often dangerous job and we have the greatest respect for our brave colleagues in the field.

Articles and reports published in Swedish media in the past week have shaken us all. Photos and videos of burned down houses, people fleeing for their lives or trying to take refuge in the cities’ metro stations. Testimonies of abuse, fear and despair, forever etching a sense of powerlessness and anguish in each of us.

Already during the first week of the invasion, journalists were killed or injured when they tried to carry out their work. Our thoughts are especially with the relatives and colleagues of the Ukrainian journalist Shakirov Dilerbek Shukurovych, who was shot dead on Saturday in the village of Zelenivka near Kherson. Around the same time, news reached us that two Danish journalists had been shot, fortunately, none of them were seriously injured.

Domestic and foreign journalists are doing extremely important work on the ground, both in Russia and Ukraine, at a time when Russian authorities are doing their utmost to make the work situation more difficult through disinformation, persecution and excessive use of force.

Free and independent journalism that critically examines the violations of international and humanitarian law that we are witnessing in Ukraine is an important weapon in the fight against the abuse and disinformation coming from Russia. It is undoubtedly the case that we are at a turning point, where a totalitarian superpower with armed forces wants to overthrow what Europe has spent the last 80 years building: democracy, the right of free sovereign states to self-determination, free media and independent courts.

It is therefore crucial that the Ukrainian, Russian and foreign media can continue to report on the Russian assaults, while the international communities use all the peaceful means available to force President Putin to the negotiating table.

Ukrainian democracy and its citizens have the right to live in peace and freedom.

The text is published in most Swedish newspapers and is signed by the Editors-in-Chief of the seven largest newspapers – Aftonbladet, Dagens industri, Dagens Nyheter, Expressen, Göteborgs-Posten, Svenska Dagbladet and Sydsvenskan. The news service Omni and TU (Swedish Media Publishers’ Association) are also supporting the appeal.

The text is produced in three different languages – Swedish, Russian and Ukrainian – and will be published in separate posts on Facebook by several of the newspapers, targeting Russia and Ukraine.

We can not stress enough the importance of the work of independent journalism in a situation like this.

Here are the texts in their entirety: