Let us introduce one of the female leaders of the future – Frida Kvarnström (31). She is Head of Platform Partners at Schibsted Sweden. 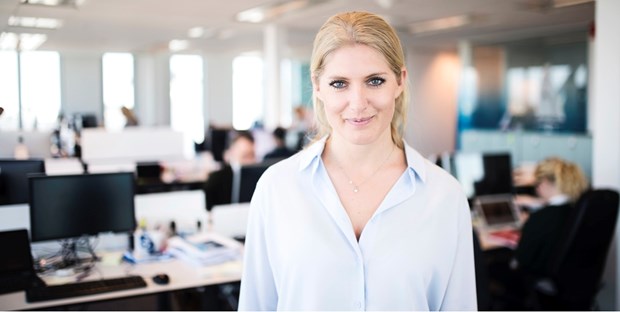 Ledarna, an organization for managers, has for the eleventh consecutive year ranked the top 75 young female managers in Sweden. Those who make a difference and demonstrate the value of good leadership. Frida Kvarnström in Schibsted is one of them and we have talked to her about leadership and what she values in a good leader.

She describes herself as a positive and caring person from Malmö who likes challenges, loves to travel, cooking exciting new dishes – and exercising.

“Right now, I’m doing A Swedish Classic event, with two stages left, so there’s a lot of cycling for me,” she says.

“Josefine advised me and told me I had to apply. In parallel with my university studies, I worked at Egmont and developed my interest in the media industry.”

How would you describe good leadership?

“Oh! The list of desirable characteristics and behaviors can be very long. I would say what characterizes a good leader differs between industries and even within a company’s departments. Personally, I appreciate transparency, clarity, self-awareness and humility.”

How do you live up to this yourself?

“I try to live up to what I appreciate in a leader, but it is even more important to know what my team needs and expects of me as a leader. I’m still at the beginning of my career and have a great desire to develop, and this is best done through my colleagues, both inside and outside the team.”

Is there a difference between male and female leaders?

“It is impossible to generalize what is male and what is female in terms of being a leader. Basically, we are all our own individuals with experiences, values ​​and knowledge that characterize our leadership.”

In conjunction with presenting the list of Sweden’s leading female managers, Ledarna has also presented its annual gender equality report. This year, the report has taken a closer look at the attitudes towards salary, gender and career among the millennial generation.

In many respects, it is a very gloomy read. The employment market will not be more equal in the next generation. The report shows, according to Ledarna, that without active measures women can continue for decades to dream of achieving high managerial positions and equal pay.

Six out of ten men believe that women and men have the same career opportunities, whereas only three out of ten women believe so.

“What surprised me in the report was that the invisible salary gap is still so large. Women who are managers work for free 58 minutes a day compared with men at the same level, in the same profession and with the same level of education. The report also shows that there are no cracks in the glass ceiling that is preventing women from reaching the higher levels of management,” says Frida Kvarnström.

The hot list entails that Frida Kvarnstöm is in place 31-50 (in no particular order within this category) in the total ranking. Therese Lundstedt, CEO of Aktieinvest, took home the first prize. See all the names here!