VG, BT and Aftenposten were awarded for quality journalism at the annual SKUP conference. SvD and Aftonbladet won the prestigious Guldspaden award for investigative journalism. 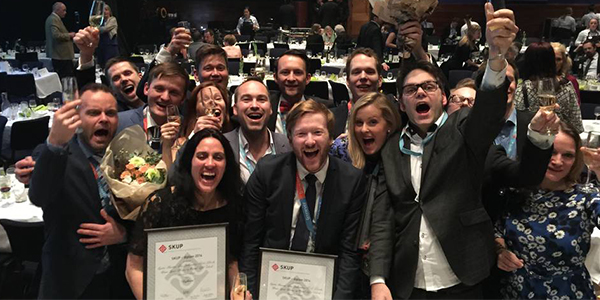 Several of Schibsted’s media houses won awards for quality journalism during the weekend.

On 11 May last year VG revealed that Norway’s leading experts had scrutinized every single road fatality since 2005 without sharing their findings with the relatives of the victims.

“The story finished by revealing a regime of widespread secrecy within a public agency that may have led to miscarriages of justice. They managed to gain access to the reports despite considerable resistance,” said Bernt Olufsen, head of the jury.

“It’s great to see VG back in the SKUP awards. We’d like to thank everyone who supported us and who let us work on this project for half a year. We now hope that this new openness will make a difference to everyone affected by fatal road accidents,” said the winners to VG.

Bergens Tidende won the SKUP award for “Asylbarna” [The refugee children] for revealing how instructions not to give priority to deporting long-term refugee children had failed to reach the National Police Directorate and for exposing other conditions involving these children.

The jury commended them on a piece of classic and exceptionally methodical investigative journalism and for their extensive use of creative research.

“We’re all really delighted. So many incredibly good projects were nominated this year, so being awarded a diploma is a huge honor,” said Eystein Røssum, who is pleased to be a member of an editorial team where he can work on this type of journalism.

In a series of articles, journalists Per Anders Johansen, Andreas Bakke Foss and Frederik Hager-Thoresen revealed how several false mobile phone base stations, so-called IMSI catchers, had been installed around the Norwegian parliament building, the office of the prime minister, and financial institutions around Aker Brygge. These false base stations can be used to eavesdrop on phone conversations, read text messages, and monitor phone data traffic.

The three Aftenposten journalists were awarded a SKUP diploma for their exposé.

“The story set the agenda and brought important information on the current status of security for mobile phones into the public domain. The story raised many questions about the activities of the Police Security Service and led to the setup of two police enquiries,” said Bernt Olufsen, head of the jury.

Dagbladet’s Kristoffer Egeberg won the main award for “Nigeria-båtene” in which he revealed how decommissioned Norwegian warships were sold to a private Nigerian company.

SvD Näringsliv’s Andreas Cervenka and Torbjörn Isacson won the prestigious Guldspaden award for their investigation into the inner circles around SCA and Industrivärden.

SvD Näringsliv’s Andreas Cervenka and Torbjörn Isacson investigated SCA, a company with a strong environmental profile, and revealed how senior executives used the company’s corporate jet for expensive private trips in which wives and children also took part. Their work has now won them the Guldspaden award for investigative journalism in the national newspaper category.

“It feels good to know that investigative journalism pays off. I’ve never covered a story that has affected and incensed so many people; not only SCA’s shareholders and the business community but also customers, employees, and society at large,” said Torbjörn Isacson.

Aftonbladet’s Maria Trägårdh also took home an award on the yearly «Guldspaden». She received this year’s «Gyllende Dynamo» for her dedicated and knowledgeable investegative journalism.

“Investegative journalism pays off and is more important now than ever”, she says.

Read more and see the pictures in Aftonbladet