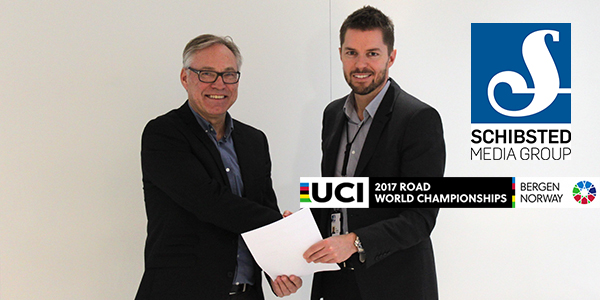 The object of the agreement is to generate publicity for the UCI Road World Championships and cooperate on staging an unforgettable celebration in Bergen. In addition, Aftenposten, Bergens Tidende, Stavanger Aftenblad and Fædrelandsvennen subscribers will have a unique chance to experience the event first-hand.

The Schibsted newspapers and Bergen 2017 will join forces and offer a subscribers exclusive ticket deals through the newspapers’ loyalty programs. The newspapers will have use of the extensive tribune facilities throughout the event. Tickets will be sold via the newspapers’ respective channels.

“We’re very happy to have reached such a good deal with Norway’s biggest national media house. It offers us a unique opportunity to reach the Norwegian population with the activities that will going on before and during the UCI Road World Championships,” says Harald Tiedemann Hansen, President of Bergen 2017.

“The UCI Road World Championships will be a major happening in Bergen. This agreement means that Bergens Tidende can offer highly attractive benefits to our subscribers during the event, and I’m delighted about that. Yet another good reason to become a subscriber,” says Øyulf Hjertenes, Editor-in-Chief and CEO of Bergens Tidende.

“This is an exciting deal, and we’re confident that our strong brands, both national and regional, will contribute to generating engagement and filling the tribunes during the UCI Road World Championships. We’re proud to be able to offer access to next year’s major sports event in our loyalty programs, which now cover more than 400,000 households. And it’s especially enjoyable for our colleagues in Bergens Tidende, who are already well under way with the plans for Bergen 2017,” says Tor Jacobsen, Chief Commercial Officer in Schibsted Norge Abonnementsmedia.