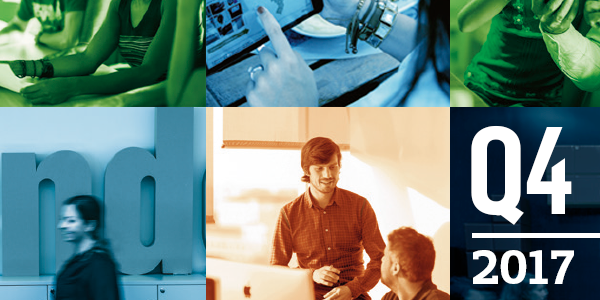 “Q4 concluded a strong 2017 for Schibsted, with profit improvement throughout the whole year. In Q4 alone, the EBITDA growth was 39 percent. The positive development is a result of great efforts in both Online classifieds, Publishing and Schibsted Growth,” CEO Rolv Erik Ryssdal says.

“In the fourth quarter Schibsted’s online classifieds operations continue to develop according to our ambitious plan, delivering 20 percent currency adjusted revenue growth and improved EBITDA margin. Our established operations were progressing well, and our investment phase companies have reduced their losses according to plan. Going forward, we aim to continue to grow revenue and profit by leveraging our leading local market positions to improve monetization in the verticals as well as reducing losses in investment phase operations. At the same time, we will benefit from our joint scalable products and technology,” Ryssdal says.

“Our publishing operations delivered good results once again. The growth in digital subscribers continued, and our product focus within digital advertising is bearing fruit, leading to a solid digital revenue growth within publishing. We are developing our publishing operations towards long term viable digital businesses, and we need to further strengthen the two revenue sources and at the same time adapt the cost base. The very foundation of this is our high quality independent journalism”, Ryssdal says.

“In both divisions, we are working to roll new digital products out in the market. For example, in Q4, improved tools for professionals were rolled out in the classifieds verticals, and within Media, the feedback to our new news apps has been good,” Ryssdal says.

“Schibsted Growth has continued its positive development, particularly driven by the personal finance segment. Lendo experienced a strong end of the year, with revenue growth of 41 percent in Sweden, and the EBITDA margin exceeded 50 percent,” CEO Rolv Erik Ryssdal says.

Conference ID is 6863160.
A recording of the conference call will be made available at www.schibsted.com/ir.