Schibsted Sverige and MittMedia sign letter of intent to plan a new media group for subscription newspapers, including SvD. 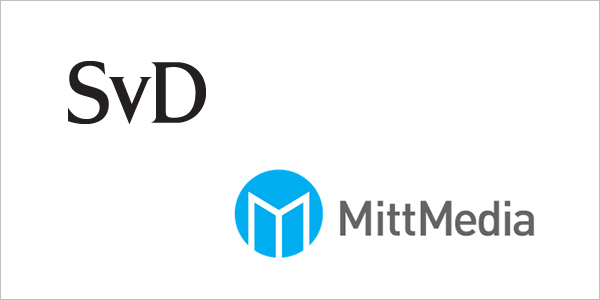 “Our intention is to build a new, strong alliance in the Swedish media market whereby the newspapers involved can strengthen their position. Cooperation like this should enable us to offer better advertising solutions, drive technology and digital development, and create even better conditions for the quality journalism that distinguishes Svenska Dagbladet,” says Raoul Grünthal, CEO of Schibsted Sverige.

MittMedia’s board chair Lars Leijonborg sees advantages in combining the companies into one group:

“Greater cooperation in the newspaper industry is imperative. We must become even stronger online, and that requires resources. Schibsted is an ideal partner for us, given its leading position in the digital transformation. If the transaction comes off, it will offer exciting opportunities for cooperation between our newspapers, with strong local and opinion journalism, and Svenska Dagbladet, with its recognized national and international quality journalism,” says Lars Leijonborg.

MittMedia is Sweden’s largest publisher of local news media. The group comprises 28 subscription morning newspapers, 12 home-delivered free newspapers, a large number of digital channels and services, and radio activities. MittMedia is also involved in digital agency activities as well as in printing and distribution. Turnover for MittMedia including its subsidiary Promedia totalled around SEK 2.4 billion in 2014.