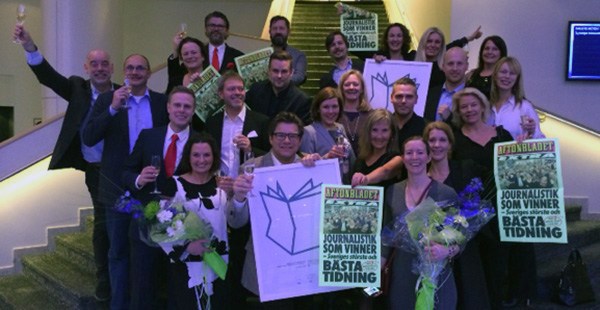 Schibsted publications practically swept the board at the Göteborg Media Days awards ceremony on Thursday. Aftonbladet and Svenske Dagbladet won the most prestigious awards.

Svenska Dagbladet Näringsliv won the award for Editorial Team of the Year.

There are several large Swedish companies who wish that this editorial team did not do such a good job at investigative journalism. At a time when PR firms looked like they might win the day, this year’s editorial team stepped up and took them down one by one. Their achievements were based on a refreshing show of courage and impressive inventiveness combined with the well-balanced voice of the reporters’ distinctive stamp.”

“I’m so delighted and proud and touched by this fantastic editorial team. They give their all, every single day, and always energize and back each other up. We would not have won this award unless we had worked together and in the same direction. And everyone at SvD can take credit for this, because Näringsliv is nothing without Svenska Dagbladet and the energy and drive that’s always there in the entire editorial team,” says Maria Rimpi, head of SvD Näringsliv.

Aftonbladet’s marketing unit was named Marketing Organization of the Year.

“We changed the way we work in 2014. We have invested heavily in and work continuously on Plus, Svenska Hjältar, Rockbjörnen and Almedalen,” says Pär Ekroth, head of marketing in Aftonbladet.

The most prestigious award – Newspaper of the Year – went to Aftonbladet.

“This year’s winner has developed original ideas and created a lasting overall impression and record traffic levels. The newspaper’s ability to avoid becoming a fat cat is impressive and inspiring, and is also demonstrated in its strong performance. Here is a winner who never looks back. It’s always full speed ahead with full transparency in its analyses and ideas, guided by the firm hand of its committed management. The Newspaper of the Year for 2015 is Aftonbladet!”

“It feels like we’ve been paid back and acknowledged for many years of work spent on developing Aftonbladet, so it’s even greater to have won. The secret behind our success is that everyone works hard and that we have a lot of fun. The secret ingredient is the culture and camaraderie,” says Jan Helin, Aftonbladet’s publisher.