The focus of this year’s report is how the journalism produced by Schibsted’s media houses can be used to empower people in their daily life. 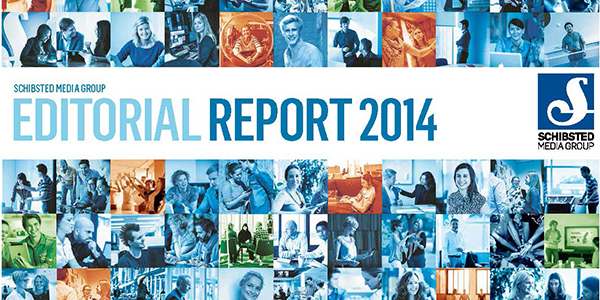 Schibsted Media Group’s Annual Editorial Report 2014 is ready. The annual editoral report was established three years ago, to highlight the journalistic status of our media houses, with special attention on the standard of ethics, journalistic methods, sources and editorial innovation. The aim of the annual editorial report is to contribute to increased transparency in Schibsted Media Group’s editorial activities.

“We firmly believe that increased transparency in journalism and journalistic methods will strengthen both the credibility and the public trust in media. Schibsted’s annual editorial report is a positive step in that direction,” says Rolv Erik Ryssdal, CEO Schibsted Media Group.

The fundamental framework of the 2014 report includes newspaper circulation, readership and online users. It also includes reports on topics such as editorial responsibility, place of issue and publishing frequency. The report from each media house also includes a letter from the editor-in-chief regarding a topic of special interest.

In 2014, Schibsted’s media houses continued their efforts to cut editorial and production costs as they transformed into more digital operations. It was also a year of increased reach and more critical acclaim.

“The publishers of Schibsted continue to give priority to quality journalism and investigative projects even in difficult times. The Schibsted Annual Editorial Report 2014 shows us that we still are in the Golden Age – both for journalism and for media users,” says Bernt Olufsen, President Schibsted Editors Forum.

“The Quality of Investigative Reporting has never been higher in Norway and Sweden. And it has never been easier to consume a massive amount of content, totally independent of time and place. A team of reporters from VG is awarded with Norway’s Grand Prize for Journalism. Investigative reporters from VG, Aftenposten and Bergens Tidende received diplomas for outstanding journalism last year at the national SKUP conference. At the same time Svenska Dagbladet was awarded with The Golden Shuffle, and Aftonbladet won The Golden Dynamo at Gräv – the Swedish counterpart of SKUP,” says Olufsen.