Techfugees and Schibsted presented curated tech solutions to refugees’ integration in Norway at Oslo Innovation kick off. The winner was the cultural exchange and inclusion app “Kom Inn”. 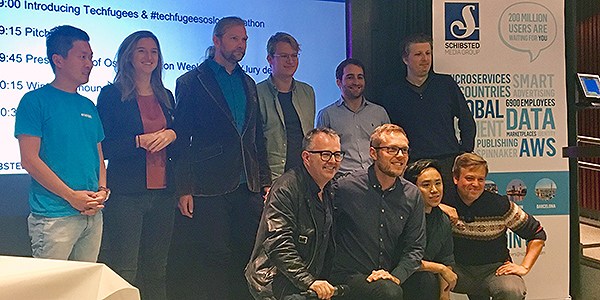 For 48 hours, more than one hundred engineers, data scientists, entrepreneurs and user experience designers gathered at Finn.no to build prototypes of innovative solutions to encourage better integration of refugees in Norway. In total, twelve teams pitched their solution, with three being named as finalists: SkiwoGo, ♥2♥ (Heart to Heart), and Kom Inn (“Come Inside”).

SkiwoGo is a translation app that connects refugees with volunteers over live video chat. When faced with an everyday challenge, such as reading a letter or booking a doctor’s appointment, the app connects the refugee directly with a multilingual volunteer. Together, they can quickly solve issues which could otherwise make someone’s day much more complicated, or even have serious long-term consequences. Volunteers who help refugees are awarded points for each video call, which earn them discounts and giveaways at selected partner stores.

In 2015, 30000 people entered Norway seeking political asylum, of which two thirds were women and children, who often speak little English nor Norwegian but have access to smart phones. ♥2♥ is a personal assistant and listening ear that helps asylum seeking pregnant refugee women in Norway understand their medical rights in their own language, and helps them to get access to medical services, including a doctor and a midwife. The project gives pregnant refugee women faster and easier access to the healthcare they seek, and alleviates pressure on existing healthcare services and refugee camps in Norway. This is done by using machine learning technologies to provide real time translations, to automate responses to common challenges, and to simplify interactions with existing medical services in a culturally context sensitive manner.

Kom Inn (“Come Inside”) is a platform for introducing refugees to their new neighbours over dinner. The dinners allow the newcomers to practice their Norwegian skills while making friends with local citizens.

The three finalists then pitched their solutions to a jury on Monday as part of Oslo Innovation Week. After thorough deliberation, the jury named Kom Inn as the winner of the first Oslo Techfugees Hackathon. Kom Inn will receive mentorship and office space sponsored by Northzone, one of the foremost VC firms in Scandinavia and Bakken&Baeck, a leading design firm in Oslo.

“This event was made possible thanks to tech companies, entrepreneurs, tech mentors and NGOs in Norway whom we met a month ago and demonstrated willingness to work and collaborate together. We, techfugees, are empowering NGOs and refugees with tech because tech scales. We are enabling NGOs to take part of the digitalisation of our societies and built 21st century solutions to one of today’s most serious societal challenge. What was created here this weekend might appear as having relatively small or limited impact and yet we know that these prototypes have the potential to be deployed in other places and countries. It also creates awareness in the tech industry about the real problems of real refugees, which are not that different from any migrant or newcomer to a city sometimes” says Josephine Goube, COO of Techfugees, the non-profit based in London.

“We are both proud and humble to be the global strategic partner for Techfugees. This hackathon is the first in a series across our hubs and companies within the next 12 months.Schibsted, as an international and tech-driven media company, sees the Techfugees strategy and philosophy of developing technologies for a positive impact on refugee lives as clearly aligned with both our values and business objectives – social responsibility is at the core of who we are and we are excited to create impact together,” says Louise Fuchs, Communications Manager for Product & Technology in Schibsted Media Group.

Members of the jury:

Chul Christian Aamodt, CEO and founder of the media company enerWE. In addition, he runs his own angel investment company, Screensailor.

Techfugees is the London-based social enterprise coordinating and curating a global community of 15,000+ innovators and engineers in 25 countries building technology meeting refugees’ needs. Techfugees organises hackathons, conferences and workshops to share knowledge and experiences; and provides its community the chance to pitch their innovations to refugee NGOs via Techfugees’ online platform, Basefugees.com. From using the Blockchain, chatbots, MOOCs and 3D printers, the techfugees community is made of tech volunteers working at applying existing tech to the five main challenges faced by refugees: access to internet, education, dignity, health and social inclusion.

The Oslo Techfugees hackathon is the second event hosted by Techfugees in Norway, bringing together refugees, asylum seekers, local NGOs, engineers, designers, social entrepreneurs and tech mentors over a weekend to build prototypes of sustainable tech solutions for refugees’ needs.

Schibsted Media Group is an international media group with 6,900 employees in 30 countries. From Norway to Malaysia, from Brazil to Sweden – millions of people around the world interact with Schibsted’s popular digital services every day. In Scandinavia, our media houses such asVG, Aftenposten, Bergens Tidende, Aftonbladet and Svenska Dagbladet keep people informed and updated on important issues in society. Our digital marketplaces such as Finn.no, Blocket.se and Leboncoin.fr help people buy and sell new and old things. In addition, our growth companies such as Shpock, Let’s Deal and Compricer provide our users with popular, digital consumer services that make their everyday life a bit easier. Together, this fulfills Schibsted Media Group’s mission of ‘Empowering people in their daily life’. Learn more at www.schibsted.com.

UT: studentbyrå (student agency)
Since 2012, UT: student agency operated by, for and with students from schools in Oslo and Akershus. We have over 400 students in our network, all of whom recognize the value of interdisciplinary teams. We offer a fearless and disruptive approach to innovation and insight work, and through contracts with industry, we work with some of the largest brands in Norway.

Katapult Tech Fest
Katapult Tech Fest strives to make the world a better place. We believe that the future of business will have to have a main purpose of contributing value to society instead of extracting value. Katapult Tech Fest will focus on impact investing, social enterprises, exponential technology and businesses that are changing the world.

Norway’s largest marketplace, FINN.no AS, was established in March 2000. FINN.no specializes in advertising and services for purchases and sales between private individuals and small and large businesses, and consists of FINN Real estate, GM, Car, Travel, Job and Small Jobs.

Today the site is visited by more than 6 million unique users on average each week, and during a normal week an average of 100,000 ads are published on FINN.no.