Aftonbladet, Stavanger Aftenblad and VG are the winners of Schibsted Journalism Awards 2016 in the categories Best Storytelling,Best Innovation and Best Scoop. 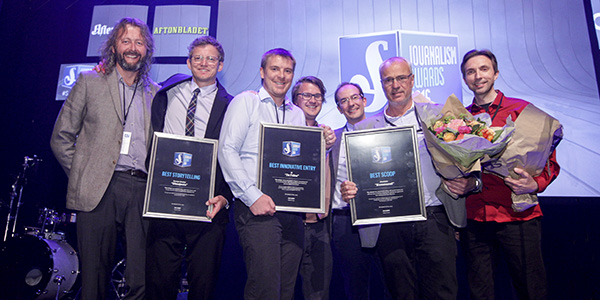 The festive prize ceremony on 19 May concluded the annual full-day event in Oslo packed with highly relevant food-for-thought, insight and inspiration for journalists at Schibsted Media Group’s media houses.

The topic of this year’s daytime conference was “At the forefront of journalism”. The external speakers included Editor Walter V. Robinson from the Boston Globe, Print and Broadcast Journalist Sacha Pfeiffer from the Boston Globe, Investigative Reporter Johannes Kr. Kristjansson from ICIJ and Deputy Director Marina Walker Guevara from ICIJ. In addition, a selection of journalists and editorial experts from Schibsted Media House’s Norwegian and Swedish media houses also contributed.

Journalists and editors were present to honor exemplary journalism in text, photo, audio or live images produced in Schibsted Media Group’s media houses in Norway and Sweden. In each of the three categories “Best Storytelling”, “Best Innovative Entry” and “Best Scoop” the winners were honored with NOK 200,000.

“It has been an honor for the jury to read, watch and experience all the well-crafted journalism created in Schibsted’s media houses in Norway and Sweden. The entries for the award reflect the current changes in the media landscape. Innovation is no longer an-add on, it is in the DNA of every journalist.

It is quite clear that the journalistic standard is very high in Schibsted, and each of this year’s winners is contributing to raising the bar. My conclusion is therefore that journalism is still regarded as a vital asset to attract the right audience”, says Olle Lidbom, Head of Jury Schibsted Journalism Awards.

Each media house can nominate three entries in the award categories Best Storytelling, Best Innovative Entry and Best Scoop. The winner in each category receives a diploma and a prize of NOK 200,000 (subject to taxation). 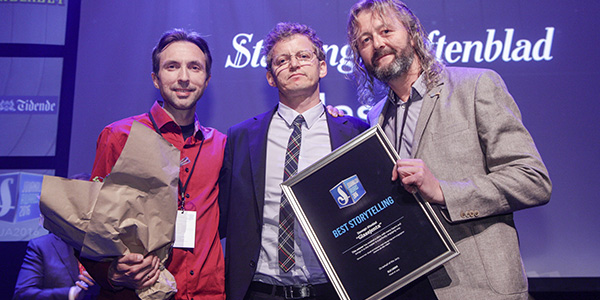 “This story of a young woman who is shockingly mistreated by the society turns out to be a quite complex story. Handled with ethical finesse, it tells us a big, universal story through the woman’s life. By using almost every contemporary journalistic tool available, the winner has created a story with lots of layers that is brought to the reader in perfectly engaging ways.”

“The refugees’ journey from Syria for a better life in Northern Europe is told in a gripping way in this story. The photojournalism gives us unique insight, and combined with the written story it brings home a piece of current history. By never being speculative the conflict is revealed in a moving way.” 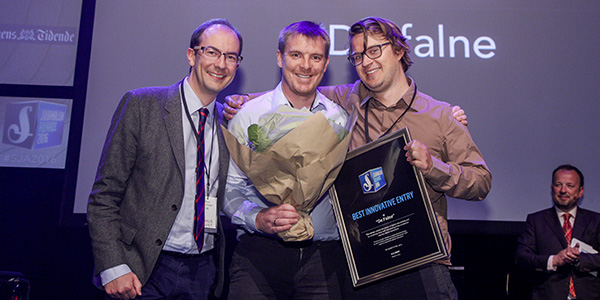 “Under the Second World War more than 11 000 Norwegians were killed in concentration camps and at sea during Germany’s occupation of Norway. Utilizing the power of digital storytelling, VG decided to collect and complete the historical facts, creating an eternal monument over the victims by documenting their destiny and deaths.”

“The regional elections raised the question: how can BT visualize this event in real-time on their TV shows. By daring to trust their own innovation capacity the team has created a street-smart solution that pushes BT to the next level by giving the journalists and editors a new tool.”

“The prize of oil and exploration of new oil fields is a complex structure with big impact on society. E24 links different data streams in a new way which explains to the readers the oil price movements and their consequences. The oil map provides both an overview of the current situation as well as a glimpse into the future. It democratizes the knowledge and creates a new understanding on power, oil and money.” 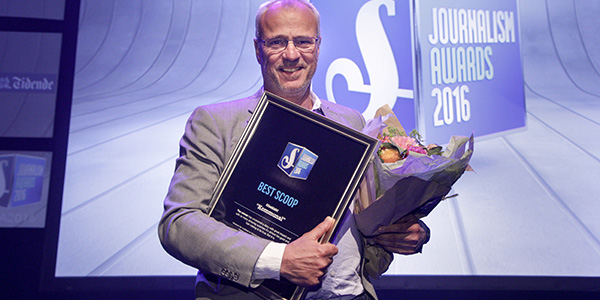 “The winner has uncovered a story with great impact and with so many amazing surprises it’s almost too good and hair-raising to be true. But it is.

Aftonbladet uncovered a story about the Swedish union Kommunal, which embezzled millions of Swedish Kronor of the members’ money on disastrous investments and luxurious benefits for union leaders. The scoop is a classic disclosure of abuse of power and the story is handled in a delicate, well-crafted way.”

“A much criticized National Day celebration in Bergen marked the beginning of this investigative story which unveiled corruption at the highest level. The scoop had big impact and is an example of how journalism can create change by illuminating the murky dealings between business and politics.”

“The Petroleum Safety Authority is an independent organ that controls and regulates the oil industry in Norway. However, this scoop reveals strong ties of financial dependency. The journalists discovered a potentially corrupt system which shook the trust to the watchdogs.”