Aftonbladet and VG are the winners of Schibsted Journalism Awards 2017 in the categories Best Storytelling, Best Innovation and Best Scoop.

The festive prize ceremony on 31 May 2017 concluded the first Power of Journalism Day in Oslo – a day-long celebration of journalism and its dynamic future.

The topic of this year’s Power of Journalism Day was “Trust. Who cares? We do”. The conference focused on the enormous power that lies in journalism, but also the challenges that we are currently facing – in a world of fake news and distrust. Along with journalists from Schibsted’s own media houses, Emily Bell, Founding Director of the Tow Center for Digital Journalism at Columbia Journalism School; Jenna Pirog, Virtual-Reality Editor at The New York Times Magazine; and Bill Adair, Creator of Politifact also were part of the agenda. The Power of Journalism Day is a collaboration between Schibsted Media Group and the Tinius Trust.

At the Schibsted Journalism Awards evening ceremony our journalists and editors were present to honor exemplary journalism in text, photo, audio or live images produced in Schibsted Media Group’s media houses in Norway and Sweden in 2016. In each of the three categories “Best Storytelling”, “Best Innovative Entry” and “Best Scoop” the winners were honored with NOK 100,000.

“What a year! The development of journalism in Schibsted’s media houses has been evolving very fast and it’s been a real inspiration to review this year’s entries. The media landscape is changing rapidly and today innovation and transformation are necessary tools in every journalist’s toolbox,” says Olle Lidbom, Head of Jury Schibsted Journalism Awards.

“This year we had the privilege to assess innovative and groundbreaking stories that affect a lot of people. As time goes by, it becomes even more obvious that real, well-made and professional journalism is vital not just in theory but as part of every citizen’s everyday life.”

The differences, inequalities and prerequisites of life along the same subway line was brought to life with this broad story. It mixes data, video, graphics, dense research and brilliant user experience in a visual and eye-opening new format. The result is a local yet global story based on a creative presentation that takes us on a mental – and physical -journey.

The winner makes us see the world from a new perspective. The stories are presented in a format that will inspire the next generation of journalism. By bringing the hidden stories to life, we will never see our fellow passengers in the same way again. 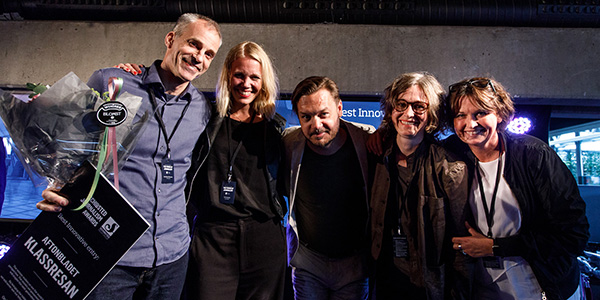 Bergens Tidende – junior.bt.no
To reach to future readers and empower young people, Bergens Tidende launched Junior. It levels with its young readers, both in content and in layout. Junior shows the power and importance that journalism can have on how we see the world. Young users of today have access to countless sources of information and entertainment – now they have one filled with great journalism.

Stavanger Aftenblad – Luftslottet Dale
Almost 100 million NOK were invested in a new housing area in the city of Sandnes.  Twelve years later not even the first brick was laid. By going through thousands expense receipts and making all of them public, Stavanger Aftenblad has illustrated the power of systematic scrutinizing carried out by the media. The database creates credibility, transparency and strong ties with the local readers.

A simple tip about a grave misbehavior by an attorney led to a sensational story with big impact. After almost a year of creative and diligent work, the journalists uncovered facts about the judicial system that should be one of the immaculate pillars of the Norwegian society. The story they revealed is true Hollywood material.

The winner has disclosed a scoop by putting piece by piece together to an unflattering picture. The story discloses improper ties that have the power to shake the trust of the most basic pillars of our society. 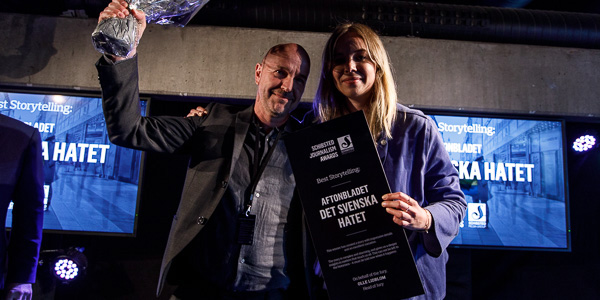 Svenska Dagbladet – Nya Karolinska
The founding of the new Karolinska Hospital, the largest building project in Sweden, was lined with misconduct and wrongdoings. Consistent and persistent work carried out by the journalists exposed enormous unplanned costs and unflattering liaisons between political, economic and commercial interests, and a waste of taxpayers’ money.

Aftenposten – Panama Papers
The Panama Papers is the largest collaborative effort between leading international journalism institutions. With over 11 million documents the project seemed unsurmountable. However, Aftenposten made a huge effort to connect and explain how Norwegian companies were part of a global structure of hiding money, raising the bar on what role journalism has in an open and democratic society.

Hate and violence in the extremist movements in Sweden are pictured and explained in detail in this long-read by Gellert Tamas. The reader is taken on a terrifying and insightful trip into the darker parts of our society. The story’s high literary qualities bring both the details and the larger picture to life. The presentation is well-crafted and proves that journalism still needs long formats.

This winner has created a story with impressive details and an excellent narrative. The story is complex and alarming, giving us deep insights into matters that touch us all. This story cannot be left for the historians to tell; it must be told now, as it takes place. 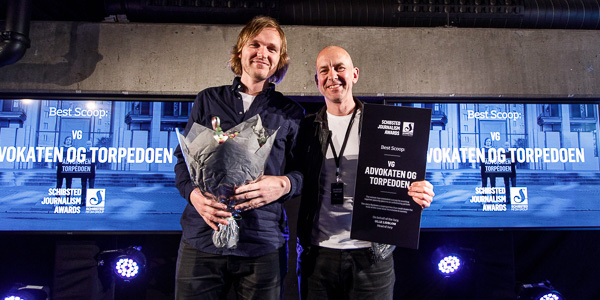 Aftenposten – Meldingene fra Utøya
The terror attack on Utøya in 2011 is still a vivid and horrifying memory for everyone. Aftenposten uses the text messages from the victims of the attack to recreate the memories. With the use of a simple yet effective, almost hypnotic presentation, the reader is brought back to the atrocities, witnessing them through the real-time experiences of the victims and their relatives.

VGTV – Magnus
In a captivating profile of the most remarkable chess player of our time, we get close to the mind of a genius. The film reveals both the strengths and weaknesses of Magnus Carlsen through an impressive amount of rare video clips and testimonies. The intelligently told story brings unique life and insight into the seemingly static chess games, which seldom seem thrilling to others than the ones particularly involved. After seeing Magnus, you will be one of them.