VG was first published on 23 June 1945 by members of the Norwegian resistance movement. Today, this courageous newspaper can look back on an impressive history and wide international recognition.

We present a short version of VG+’s own story ‘Se det i VG’ [See it in VG] written by Espen A Hansen.

Verdens Gang is not just a newspaper; it is a new kind newspaper. That was how the first edition was introduced when hit hit the streets on Saturday 23. June 1945.

Verdens Gang was launched by key figures in the Norwegian Home Guard, from the ruins of the Second World War, and is closely associated with post-war Norway.

The newspaper was founded on the growth of a new society, the new Norway, and it ran stories of restoration, modernization, the growing consumer culture, the welfare state, and democracy. “What the occupation has cost us” read the lead story in the first edition. 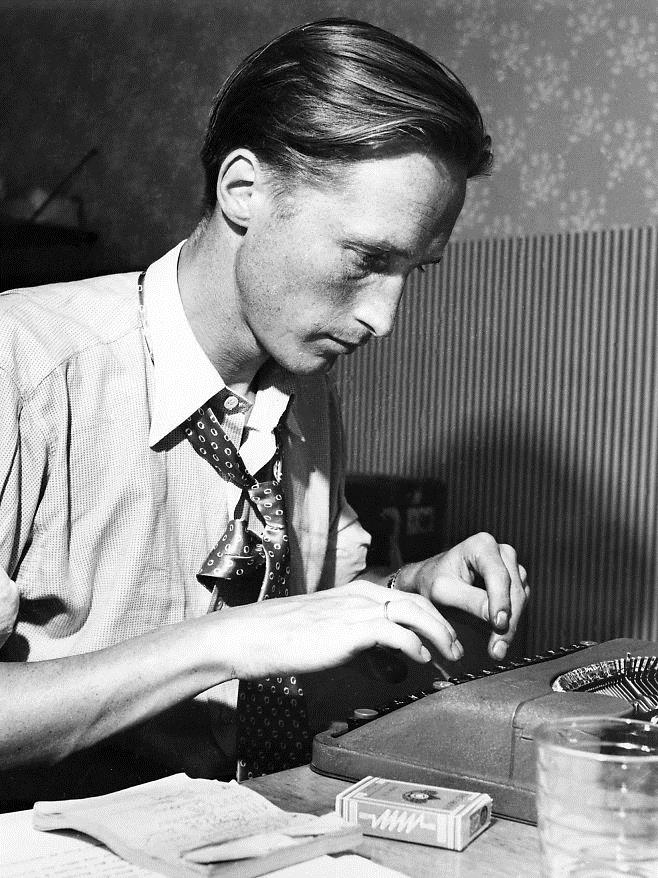 Einar Munthe-Kaas, a young VG journalist, at his typewriter. Writing from notes made on his notepad. Around 1950. Photo: Unknown.

The home guard newspaper received anonymous death threats during the early post-war years. There were times when journalist and later editor Oskar Hasselknippe (1911–2001), who himself had been a leading figure in Milorg (Norwegian resistance movement), went to work armed with a pistol on the advice of the police.

2 January 1963 marks a turning point in the history of VG. It was the first time the newspaper appeared in tabloid format. VG was the first Norwegian newspaper in modern times to make the transition to “a new, practical, modern and streamlined format.”

New progress and developments changed people’s everyday life. and VG wanted to reflect this: “It can be TV, radio or politics. It can be technical, medical or new advances in space travel. But all stories will have one essential quality: they concern all of us because we are all affected.”

The fight for TV

VG fought for introducing television in Norway in 1954, filled its columns with stories of science, outdoor life, cars, hobbies, and topics that interested the man in the street.

The idea of moving to the tabloid format was in fact already being considered in 1952, before the transition to the evening paper, and the advertising and sales departments saw it as an unquestionably positive development. However, it would take another 11 years before the move came about.

The first tabloid edition was an experiment in graphic design. A photo of ski jumper Toralf Engan hovering through the air was spread across the front and back pages. “Here is the story after his GREATEST achievement. Engan tells his own story in today’s VG.” 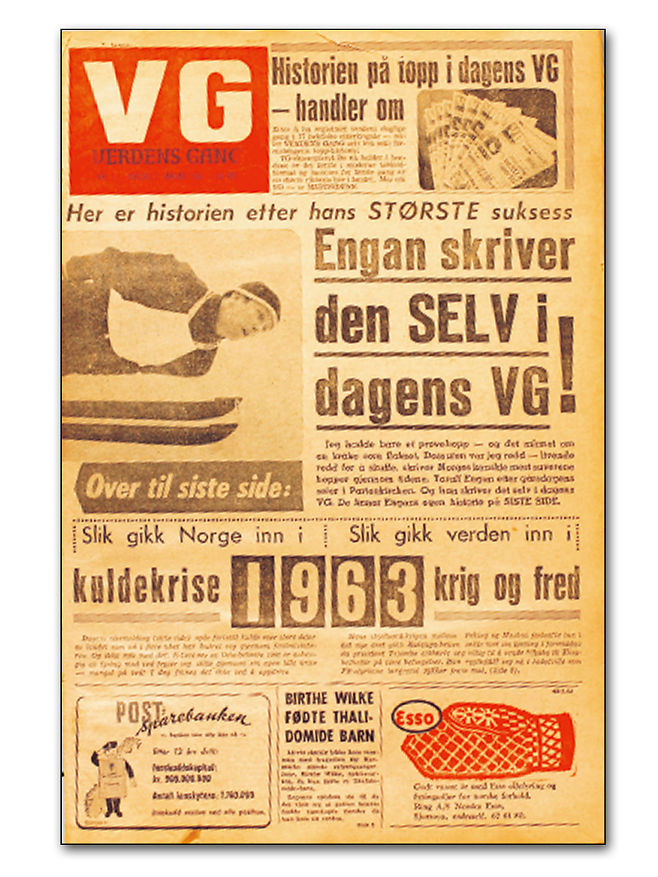 THE FRONT PAGE OF THE FIRST TABLOID EDITION: VG’s management were already considering the tabloid format in 1952, but it would take another 11 years before the newspaper finally took the step in 1963. The first edition gave a hint of what was to come.

The headline gave more than a hint of what the front page of the single-copy newspaper would look like during its heyday.

On 23 June 1966, on its 21st anniversary (the age of majority at the time), VG acquires a new owner in Aftenposten, and it is now that the success story  really begins. The fate of this ‘problem child’ was to join up with Norway’s biggest newspaper  –  and to later win that position for itself.

The morning paper Aftenposten had gained an ally in the newspaper war against its main rival, the evening paper Dagbladet. Aftenposten’s analysts conservatively forecast that VG would achieve a circulation of 50,000 in 1974.

When VG dethrones Aftenposten as Norway’s biggest newspaper in 1981 with an average circulation of 227,000, it had already enjoyed a boom period for several years. From 1971, profits were around the NOK 10 million mark. In its record year 1982 it made a profit of NOK 50 million  –  but even that could not match what lay in store.

The newspaper’s success was not due to content alone, but probably just as much to its accessibility.

VG’s marketing department adopted the formula of the four Rs: Right product at the Right time, at the Right place, and in the Right amount. The newspaper also had its own propaganda committee, which had been set up in 1967 and was responsible for the increasingly popular slogan “Se det i VG” [See it in VG].

Cinema advertising was another means of reaching new readers.

But VG could never have been so successful had it not been for its editorial choices for layout, content and technology. 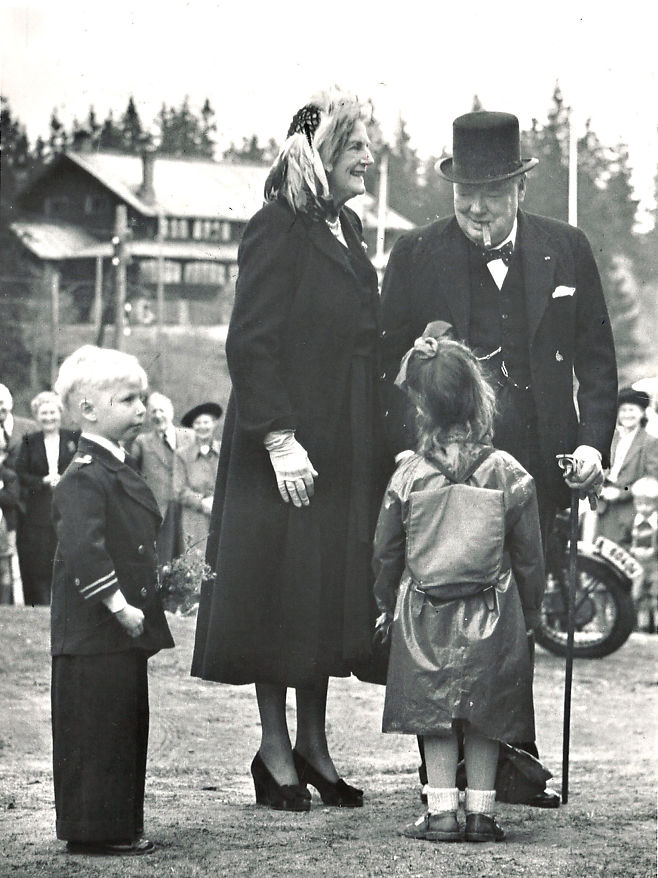 NEWSPAPER WAR: In an attempt to win the newspaper war, Verdens Gang secured exclusive rights to publish Winston Churchill’s memoirs in 1948. Churchill is seen here with his wife Clementine in May 1948. The price: NOK 250,000, which is equivalent to NOK 4.9 million in today’s money. The result: 3,500 new subscribers. Photo: Knut Skarland.

VG through 70 years: From humble newspaper to digital media giant.

■ 1952: Verdens Gang becomes an afternoon paper due to declining circulation. The VG dice is launched.

■ 1959: The first regional office is opened in Bergen.

■ 1988: The Schibsted Group is reorganised as a private limited liability company with full ownership interests in VG and Aftenposten. VG is printed in six different locations, including Spain.

■ 1990: VG launches its first Sunday edition on 2 September, one week after Dagbladet.

■ 1992: Schibsted is listed on the Oslo stock exchange.  25 percent of its shares are offered for sale.

■ 1994: VG moves into the new newspaper building in Akersgaten 55. The Sunday edition breaks new circulation records with over 300,000 copies sold on 31 July.  That same month, VG’s daily edition achieves an average circulation of over 400,000 for the first time.