Aftenposten+ app, MinMote and VG-lista walked off with awards at the European Digital Media Awards ceremony in London. 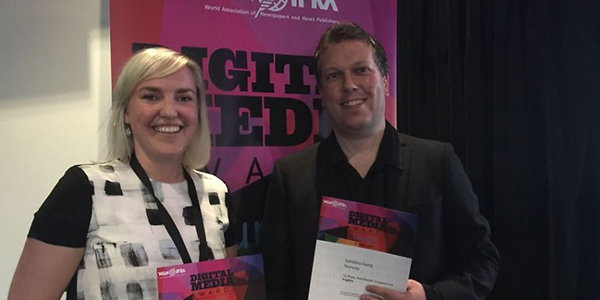 The awards were presented by the World Association of Newspapers and News Publishers (WAN-IFRA), and were announced at the European Digital Media Awards ceremony in London.

VG-lista won the award for Best Reader Engagement while the niche site MinMote was acclaimed Best New Product. This is the second year in a row that VG wins two awards in this international media competition.

Aftenposten shared the award for Best in Tablet Publishing for its Aftenposten+ app with Germany’s Axel Springer Verlag. Jury chair Mario García described the app as one of the best newspaper versions on tablet, with an excellent combination of long and short content. Good pictures and a design with Aftenposten’s look-and-feel.

VG-lista won the award for the project entitled ‘By X’ (City X) which Sortland ended up winning.

More than 47,000 pictures were tagged on Instagram during the competition period. As many as 137 videos were posted on YouTube in connection with the competition, which is a collaboration between DNB and VG.

Øyvind Solstad, who led the project, was in London to accept the award.

“It’s incredibly pleasing that the jury appreciated the enormous engagement shown by young and old during #vglista last year. Dancing in the streets, thousands of likes and shares, tattoos, pictures, videos, and madness,” he told VG.

“I’m not surprised that we won for this project. I’ve never seen anything like the engagement in social media for a VG project. Norway bent over backwards to get the VG concept for its city,” said VG’s Digital Editor Ola Stenberg.

VG is a team

Stenberg said that winning awards like this generates untold inspiration.

“It’s awards like this that confirm how well VG works as a team, and it’s the result of an incredible number of people working together to challenge established conventions. We’re one big team in VG, and we work really hard to maintain a high international standard,” he said.