In times when journalism is threatened, it is increasingly important to highlight successful cases in order to be inspired and to discuss current challenges. Hear more at our free conferences in Oslo and Stockholm. 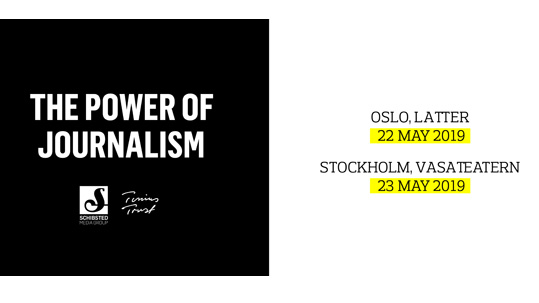 Over the years some of the world’s most prominent opinion leaders, researchers and journalists have been at Schibsted’s Power of Journalism event to be part of the crucial discussion. This year, the event will be held in Stockholm in addition to Oslo. The Power of Journalism is organised by Schibsted and our largest shareholder, the Tinius Trust.

Make sure to reserve your spot – the event is free but seats are limited.
The conference will take place in Oslo 22. May and in Stockholm 23. May.

Some of the speakers and topics you can hear:

Facebook – the end of journalism?
Jesper Doub – Facebook’s Director of Media Partnerships Europe
Facebook has been accused of weakening democracy and undermining established publishers. But what does Facebook say about this statement?
Both in Oslo and Stockholm

Getting the story out – no matter the cost
Rana Ayyub – Indian freelance journalist and author
Hear about how she went undercover for 10 months to uncover reprehensible attitudes and cooperation between police and bureaucrats in the state of Gujarat.
Both in Oslo and Stockholm

Putting the digital gangsters on the spot
Damian Collins – Conservative Member of the British Parliament
Damian will present the recently published report of disinformation and “fake news”.
Can the global platform operators be controlled and what influence will the report have on European policy?
Only in Stockholm

The Tolga Case, VG
VG Journalists Maria Mikkelsen and Mona Grivi Norman
VG revealed what happened when the three brothers were wrongfully registered as intellectually disabled by the municipality. The journalists will talk about how the award-winning VG disclosure came about.
Both in Oslo and Stockholm.

Receipts of Power – Aftonbladet
Journalists from Aftonbladet will share their revelation:
Aftonbladet exposed that several Members of Parliament have been breaking the rules on privileges to gain personal benefits since 2018.

A political swindle – Aftenposten
Henning Carr Ekroll, Carl Alfred Dahl
Can voters trust the people they have elected? How do politicians use public money that they have access to? To what degree are they prepared to abide by the same rules they set for others?

The Future of Digital Storytelling – The Tinder Swindler, VG
Erlend Ofte Arntsen, Natalie Remøe Hansen, Kristoffer Kumar
The journalists will explain how they both devised an innovative method of storytelling and found the individual at the centre of the investigation, The Tinder Swindler.

Jehovah’s justice, Fædrelandsvennen
Connie Bentzrud and Tarjei Leer-Salvesen
Fædrelandsvennen uncovered a Christian version of Sharia courts: the religious court of Jehovah’s Witnesses. Hear more about the treatment of vulnerable women and children, Faithleaks and the secret book of elders.