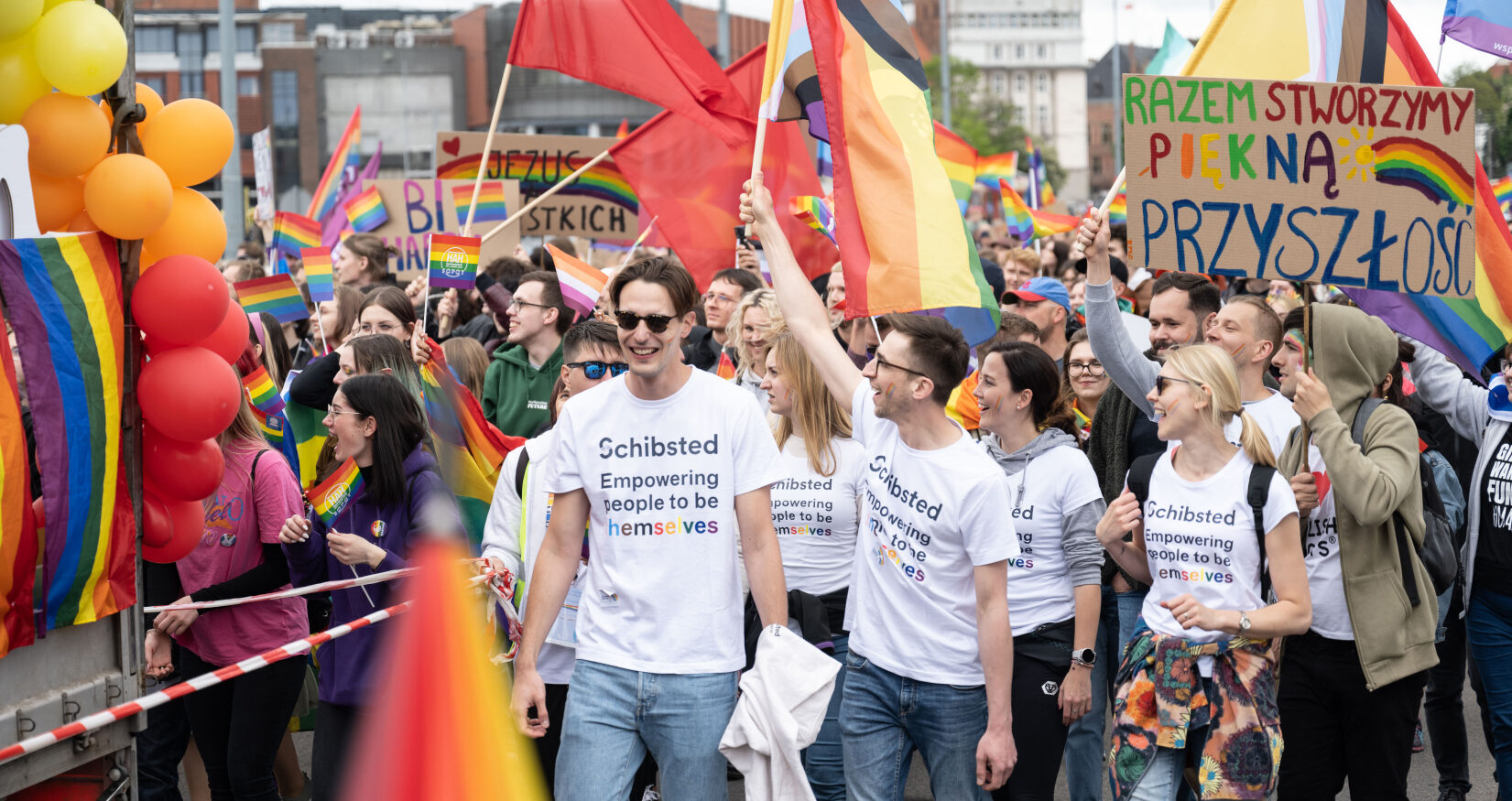 In a company with 6000 employees, you will find a wide variety of people. The sense of belonging for everyone in the organisation is a subject that is on top of the agenda for many employees. One of them is Paweł Szonecki, Employer Branding Specialist at Schibsted, who organised Pride Month at Schibsted in June this year.

How did the idea of celebrating Pride first come to your mind?

The overall story is pretty prosaic. On 1 July 2021, I joined Schibsted Poland. At that time, due to the pandemic, all parades in Poland were postponed until August and I found out that we weren’t planning on being involved. I truly believe in the importance of supporting the LGBTQ+ community by participating in equality parades and raising its voice, so I took it upon myself to change that. After discussions internally we were granted permission and a budget to participate in two parades organised in cities where Schibsted Tech Polska has offices – Krakow and Gdansk. I was unaware that these would be the first equality parades for the entire Schibsted.

And what is the reason behind the decision to take this initiative globally?

Following the local success in Poland we decided to come up with a way to organise Pride Month globally for our entire organisation. Since our company operates in 5 countries (Poland, Sweden, Denmark, Norway, and Finland) and covers more than 60 brands, it became a large project. We involved colleagues from different areas of the company to participate in the project to do something that would make our company demonstrate solidarity and support for the LGBTQ+ community.

The project has a personal meaning for me. As a homosexual person in Poland, I know that only by increasing the visibility of LGBTQ+ people in the public space, are we able to improve the current situation.

Will you tell us more about the initiatives?

Our objective was to attend parades in some of the major cities where Schibsted has its seat: Krakow, Gdansk, Stockholm, Oslo, Copenhagen, and Helsinki. At each, a representation of the company appeared in branded T-shirts and banners. In the course of the work, we also came up with the idea to organise the first Schibsted Pride Day – a day to educate employees about equality and LGBTQ+ rights. But not only – it was also a time for our colleagues who belong to this community could share their stories, experiences and be heard. All employees stood up to their responsibility, not only by demonstrating their support but also by celebrating this meaningful month together with Schibsted’s LGBTQ+ community.

For example, in Stockholm, our project turned into a big party on the roof of the office building to celebrate the first day of summer and Pride Month at the same time, and in the Oslo office there was a banner several metres high with the theme of our action. We carried out all activities under the common motto: ‘Empowering people to be themselves’.

It was an important milestone to show solidarity towards the LGBTQ+ community and show everyone that there is a place for them within the structures of Schibsted – we can be who we want to be regardless of our feelings or who we love. We had a great time while feeling grateful and happy to be part of this together.

A day with the CEO of Schibsted - a mutual knowledge exchange

A day with the CEO of Schibsted - a mutual knowledge exchange